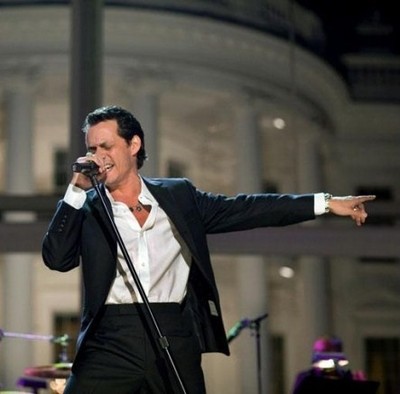 Marco Antonio Muñiz (born September 16, 1968), known professionally as Marc Anthony, is an American actor, record producer and singer-songwriter. Anthony is the top selling tropical salsa artist of all time. The two-time Grammy and three-time Latin Grammy–winner has sold more than 12 million albums worldwide. He is best known for his Latin salsa numbers and ballads. Anthony has won numerous awards and his achievements have been honored through various recognitions. He was the recipient of the 2009 Congressional Hispanic Caucus Institute (CHCI) Chair's Award. He also received the "2009 CHCI Chair's Lifetime Achievement Award" on September 16, 2009.

Marco Antonio Muñiz, known professionally by his stage name Marc Anthony, born in New York City to Puerto Rican parents Guillermina, a housewife, and Felipe Muñiz, a musician and hospital lunchroom worker. Anthony is of Puerto Rican descent, and his parents named him after Mexican singer Marco Antonio Muñiz. Anthony grew up in East Harlem, also known as Spanish Harlem and El Barrio, and is the youngest of eight surviving children. Marc Anthony Muñiz was raised in the same housing development with childhood friend, platinum producer and song writer Frankie Cutlass  He was raised Roman Catholic.

Muñiz began his career as a session vocalist for freestyle and Underground New York house music acts. After changing his name to avoid confusion with his namesake, Anthony worked as a songwriter and backing vocalist for pop acts including Menudo and the Latin Rascals. His first album was a freestyle music record, "Rebel", in 1988 on Bluedog Records. That same year he wrote and produced "Boy I've Been Told" for fellow freestyle artist Sa-Fire. Then in 1989, he sang backup vocals for Ann-Marie on the freestyle club hit, "With or Without You" produced by Little Louie Vega and Todd Terry. A year later, 1990, with Little Louie Vega and Todd Terry, Marc wrote and whispered a duet with Chrissy I-eece, called "You Should Know By Now". In 1992, still working with Todd Terry, he provided vocals for "Love Change" which is on the flip-side of a 12" vinyl released by Elan and The Powermachine titled "Here's Your Hat", production of Todd Terry. At the same time, he collaborated with music producer Little Louie Vega, who featured the singer on many another freestyle-flavored club hits "Ride On The Rhythm" and the "When The Night Is Over" album, which featured the Freestyle classic "Time". In 1992, Vega and Anthony opened for Latin bandleader Tito Puente at New York's Madison Square Garden. After 1992, he changed his style from freestyle to salsa and other Latin styles.

Anthony played supporting roles in projects including 1995's Hackers, and 1996's Big Night and The Substitute. He appeared with Rubén Blades and Puerto Rican pop singer Ednita Nazario in Paul Simon's 1998 stage musical, The Capeman, which ran for 68 performances. He had a role in Martin Scorsese's 1999 drama Bringing Out the Dead, and in 2001, opposite Salma Hayek, was in the filmIn the Time of the Butterflies. In Man On Fire (2004), Anthony, opposite Denzel Washington, played a wealthy businessman who hires a former U.S. Marine to protect his daughter from kidnappers in Mexico City.

Marc married former Miss Universe Dayanara Torres on May 9, 2000 in Las Vegas. They have two sons, Cristian Marcus Muñiz (February 5, 2001) and Ryan Adrian Muñiz (August 16, 2003). There were many problems in the marriage, and the couple separated in early 2002. They later reconciled and renewed their vows in a formal ceremony on December 7, 2002 at San Juan's Cathedral in Puerto Rico. The rocky marriage came to an end in October 2003 with Dayanara filing for divorce in January 2004. To help in her recovery from the divorce, Dayanara traded her engagement ring for a diamond-encrusted Cartier watch and wrote the book Married to Me: How Committing to Myself Led to Triumph After Divorce.

When his divorce proceedings began, Anthony was spotted with long-time friend Jennifer Lopez. Prior to his first marriage and her second, they had briefly dated. Lopez and Anthony married on June 5, 2004, less than a week after his divorce was finalized. Guests had been invited to an "afternoon party", unaware they were attending a wedding. Lopez gave birth to their children, twins Emme Maribel Muñiz and Maximillian David Muñiz on February 22, 2008. People (magazine) paid $6 million for the first photos of the twins. In 2009, Anthony and Lopez purchased a stake in the Miami Dolphins. They joined several personalities in buying small stakes in the club, including Gloria and Emilio Estefan, Venus and Serena Williams, and Fergie. Anthony and Lopez announced their separation in July 2011, with Anthony filing for divorce on April 9, 2012. Anthony is currently dating Topshop heiress Chloe Green.