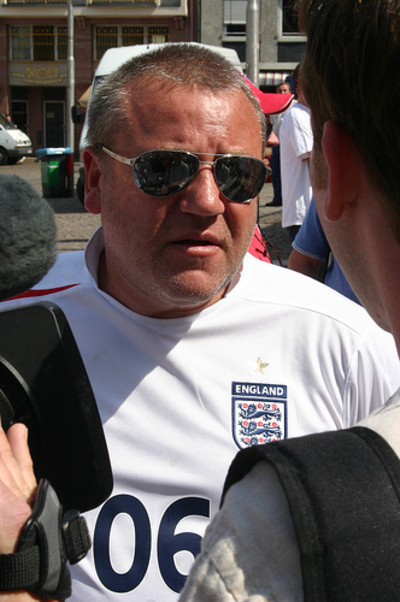 Raymond Andrew "Ray" Winstone (born 19 February 1957) is an English film and television actor. He is mostly known for his "hard man" roles, beginning with his role as Carlin in the 1979 film Scum and Will Scarlet in the television series Robin of Sherwood. He has also become well known as a voice over actor, and has recently branched out into film production. He has appeared in films such as Cold Mountain, Nil By Mouth, King Arthur, The Proposition, The Departed, Beowulf, Indiana Jones and the Kingdom of the Crystal Skull, Edge of Darkness and Rango. He played Tubal-cain in Noah (2014).

Winstone was born in Homerton, Hackney, London. Winstone moved to Enfield when he was seven, and grew up on a council estate just off the A10 road. His father, Raymond J. Winstone, ran a fruit and vegetable business (he is now a black cab driver), while his mother, Margaret (née Richardson), had a job emptying fruit machines. Winstone recalls playing with his friends on bomb sites until "Moors Murderers" Ian Brady and Myra Hindley were arrested for killing three children. Ray joined Brimsdown Primary School and then he was educated at Edmonton County School, which had changed from a grammar school to a comprehensive upon his arrival. He also attended Corona Theatre School. He did not take to school, eventually leaving with a single CSE (Grade 2) in Drama.

Winstone had an early affinity for acting; his father would take him to the cinema every Wednesday afternoon. Later, he would witness Albert Finney in Saturday Night and Sunday Morning, and stated: "I thought, 'I could be that geezer'." Other major influences included John Wayne, James Cagney, and Edward G. Robinson. After borrowing extra tuition money from a friend's mother, a drama teacher, he took to the stage and appeared as a Cockney newspaper seller in a production of Emil and the Detectives.

Winstone was also a fan of boxing. Known to his friends as Winnie, he was called Little Sugs at home (his father already being known as Sugar, after Sugar Ray Robinson). At the age of 12, Winstone joined the famous Repton Amateur Boxing Club and, over the next 10 years, won 80 out of 88 bouts. At welterweight, he was London schoolboy champion on three occasions, fighting twice for England. The experience gave him a perspective on his later career: "If you can get in a ring with 2,000 people watching and be smacked around by another guy, then walking onstage isn't hard."

Deciding to pursue drama, Winstone enrolled at the Corona Stage Academy in Hammersmith. At £900 a term, it was expensive, considering the average wage was then about £36 a week.

He landed his first major role in What a Crazy World at the Theatre Royal, Stratford, London, but he danced and sang badly, leading his usually-supportive father to say "Give it up, while you're ahead." One of his first TV appearances came in the 1976 "Loving Arms" episode of the popular police series The Sweeney where he was credited as "Raymond Winstone" and played a minor part as an unnamed young thug.

After a short run in the TV series Fox, and a role in Ladies and Gentlemen, The Fabulous Stains (alongside Diane Lane, Laura Dern and a host of real life punks like Fee Waybill, Steve Jones, Paul Cook and Paul Simonon), Winstone got another big break, being cast as Will Scarlet in Robin of Sherwood. He proved immensely popular and enjoyed the role, considering Scarlet to be "the first football hooligan" – though he was not fond of the dubbed German version, in which he said he sounded like a "psychotic mincer." But once the show was over, the parts dried up. He got involved in co-producing Tank Malling, starring Jason Connery, Amanda Donohoe and Maria Whittaker, and scored a few TV parts. Over the years, he's appeared in TV shows including The Sweeney, The Bill, Boon, Fairly Secret Army (as Stubby Collins), Ever Decreasing Circles, One Foot in the Grave, Murder Most Horrid, Birds of a Feather, Minder, Kavanagh QC, Auf Wiedersehen, Pet and Get-back (with the fledgling Kate Winslet). During this period, he was increasingly drawn to the theatre, playing in Hinkemann in 1988, Some Voices in 1994 and Dealer's Choice and Pale Horse the following year.

Winstone was asked to appear in Mr Thomas, a play written by his friend and fellow Londoner Kathy Burke. The reviews were good, and led to Winstone being cast, alongside Burke, in Gary Oldman's drama Nil By Mouth. He was widely lauded for his performance as an alcoholic wife-batterer, receiving a BAFTA nomination (17 years after his Best Newcomer award for That Summer). He continued to play "tough guy" roles in the likes of Face and The War Zone – the latter especially controversial, as he played a man who rapes his own daughter – but that obvious toughness would also allow him to play decent men softened by love in romantic comedies like Fanny and Elvis and There's Only One Jimmy Grimble. In Last Christmas, he played a dead man, now a trainee angel, who returns from Heaven to help his young son cope with his bereavement, written by Tony Grounds, with whom Winstone worked again on Births, Marriages & Deaths and Our Boy, the latter winning him the Royal Television Society Best Actor Award. They worked together again in 2006 on All in the Game where Winstone portrayed a football manager. He did a series of Holsten Pils advertisements where he played upon the phrase "Who's the Daddy", coined in the film Scum.

Winstone met his wife, Elaine, while filming That Summer in 1979. They have three daughters; the eldest two, Lois and Jaime, are both actresses.

Winstone lives with his wife in Roydon, Essex. He is an avid fan of West Ham United and promoted their 2009 home kit.