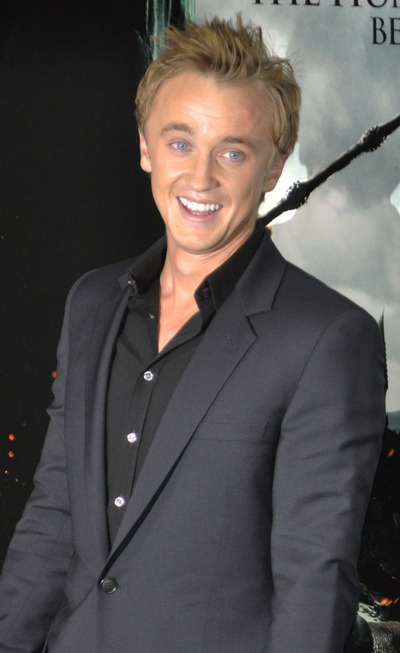 Thomas Andrew Felton (born 22 September 1987) is an English actor, known for playing the role of Draco Malfoy in the Harry Potter film series. Felton began appearing in commercials when he was 8 years old for companies such as Commercial Union and Barclaycard. He made his screen debut in the role of Peagreen Clock in The Borrowers (1997) and he portrayed Louis T. Leonowens in Anna and the King (1999). He rose to prominence for the film adaptations of the best-selling Harry Potter novels by author J.K. Rowling, for which he auditioned at age 12. His performances in Harry Potter and the Half-Blood Prince and Harry Potter and the Deathly Hallows – Part 1 won him two consecutive MTV Movie Awards for Best Villain in 2010 and 2011.

Following the conclusion of the series in 2011, Felton appeared in the 2011 film Rise of the Planet of the Apes, a reboot of the Planet of the Apes series. He had roles in minor films, appearing in the 2012 films The Apparition and From the Rough, and he starred as James Ashford in the critically acclaimed period drama film Belle (2013), followed by roles in In Secret (2014) and Against the Sun (2014). In 2016, Felton will star in four films, including the epic historical film Risen, alongside Joseph Fiennes, and the period biopic A United Kingdom, alongside David Oyelowo and Rosamund Pike.

Felton was born in Epsom, the son of Sharon and Peter Felton. He was educated at West Horsley's Cranmore School, until the age of thirteen. Felton is a singer and was part of a choir at the age of seven. He was a member of four school choirs and was given the chance to be part of the Guildford Cathedral Choir. Felton is the youngest of four sons.

Felton began acting in adverts for companies such as Commercial Union and Barclaycard. In 1995, he performed the voice of James in the television series Bugs and landed his first feature film role in 1997 when he played the part of Peagreen Clock in Peter Hewitt's film The Borrowers. Felton played witness Thomas Ingham opposite Clive Owen in Second Sight in 1999. Felton's role of Louis T. Leonowens in the film Anna and the King, starring Jodie Foster, was also filmed in 1999 in Malaysia. Felton made an appearance in the episode "Hide and Seek" of Second Sight 2 followed in 2000. The Guildford Cathedral Choir also offered him a position.

By autumn 2001, Felton had become known internationally for his portrayal of Draco Malfoy, the bully, enemy and foil of Harry Potter in Harry Potter and the Philosopher's Stone. He appeared in all of the Harry Potter films. Before landing the part of Malfoy, Felton had auditioned to play Harry Potter and Ron Weasley. Of the four young actors who succeeded in getting the main roles, Felton had the most extensive film experience. Thereafter Felton's schedule began to fill with the work of filming the first four films, premieres, and contributing to articles and interviews. He also received the Disney Channel's Kids Awards for Best DVD Harry Potter and the Chamber of Secrets on 22 September 2003. Felton started his Official Tom Felton Fan Club in 2004 and took part in autograph signing events. His fan club was reported to have attracted so many fans that Felton had to put a temporary stop to people signing up to his fan club. The autographing session in Germany drew people from Chile and one fan in Cologne summarised: "Tom is a real nice, professional young man, always happy, smiling, laughing, full of power — a real gentleman." When the fan asked Felton what kids should do if someone like his character is bullying them, he said: "Tell someone. You do not want to keep it to yourself."

After filming Harry Potter and the Goblet of Fire, Felton made a guest appearance on Home Farm Twins in 2005, where he played Adam Baker in the short-lived series. He attended Collectormania on 30 April 2005 and London's world premiere for Harry Potter and the Goblet of Fire. On 11 November 2005, he and Rupert Grint presented Liz Carnell with the Daily Mirror's Pride of Britain Award for all of her work to raise awareness of the dangers of bullying. Felton worked on Harry Potter and the Order of the Phoenix throughout 2006. Having read more of the Harry Potter books, Felton reflected: "I have had input into Draco. If they give me a line and I do not think it is something he would say, I suggest changing it. They do listen to you and you do feel a part of it."

In 2003, Felton and his brother Chris worked with Joe Babbitt, the St. Lawrence County Angler's Association, the New York State Department of Environmental Conservation Region 6, the Chamber of Commerce, and a diverse group of other organisations to form the World Junior Carp Tournament, which involves competitive fishing for ages 11 to 18.

In early 2015, Felton posted an Instagram photo of himself and Jade Olivia, writing, "To the girl that has my heart. Happy 7 year anniversary." Felton and Olivia have been together since February 2008; they met when filming the Harry Potter series, as Jade was an assistant. As of February 2016, it is assumed they have broken up.