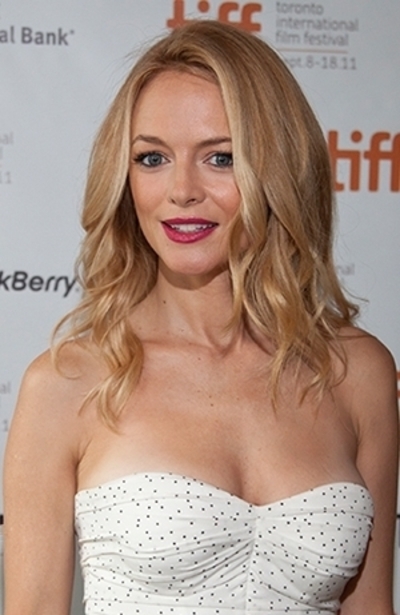 Heather Joan Graham (born January 29, 1970) is an American actress.  After starring in various commercials, her first high-profile starring role came in 1988 with the teen comedy License to Drive, followed by her breakout role in Gus Van Sant's critically acclaimed 1989 film Drugstore Cowboy.  She then took a number of supporting roles in films such as Shout (1991), Six Degrees of Separation (1993), Swingers (1996) and in TV series Twin Peaks (1991) and its prequel film Fire Walk with Me (1992) before gaining critical praise as porn starlet Brandi/Rollergirl in Paul Thomas Anderson's Boogie Nights (1997).  In 1999, she co-starred in Bowfinger and Austin Powers: The Spy Who Shagged Me.

In the 2000s, Graham starred in a number of films ranging from studio films to smaller indies like Committed (2000), Say It Isn't So (2001), Anger Management (2003), Mary (2005), Gray Matters (2007) and The Hangover (2009).  She also had a brief stint on the TV series Scrubs in 2004, before starring as the title character in the short-lived Emily's Reasons Why Not in 2006.  Widely regarded a sex symbol, she often appears in magazines' 'Most Beautiful' and 'Sexiest' lists Graham is also a public advocate for Children International, and supported the climate change campaign Global Cool in 2007.

Heather Graham was born in Milwaukee, Wisconsin, the older of two children. Her family is of "three quarters Irish" descent, with her father's side from County Cork.  Her younger sister, Aimee Graham, is also an actress, and writer. Their mother, Joan (née Bransfield), is a teacher and author of children's books.  Their father, James Graham, is a retired FBI agent.  The girls were raised with traditional Catholic values.  Her family relocated repeatedly before settling down in Agoura Hills, California, when she was nine years old.  She was introduced to acting during a school production of The Wizard of Oz.

After high school, Graham enrolled in extension classes at the University of California at Los Angeles (UCLA) and studied English for two years.  After two years Graham withdrew from UCLA to pursue acting full-time, despite her parents' objections.

Graham's first film appearance was an uncredited cameo in Mrs. Soffel (1984).  Her first credited film appearance was in the television film Student Exchange.  In 1986, she appeared on a special "Teen Week" episode of the NBC-TV game show Scrabble.  Then she appeared in numerous television commercials, and an episode of the sitcom Growing Pains in 1987.

Graham's first high-profile starring role came in the 1988 Corey Haim/Corey Feldman vehicle License to Drive, which saw her as a popular girl named Mercedes Lane, who serves as the love interest of Haim's character.  Her efforts won her a Young Artist Award nomination in the Best Young Actress in a Motion Picture Comedy or Fantasy category.  Her strict parents forbade her to accept a role in the black comedy Heathers (1988), which had an expletive-rich script.  Graham auditioned for the role of Baby in Dirty Dancing (1987), which went to Jennifer Grey.

Graham dated UK musician/actor Adam Ant, actors James Woods, whom she first met while studying at UCLA, Kyle McLachlan and Heath Ledger, whom she met in Prague while filming From Hell, and directors Stephen Hopkins, Edward Burns and Yaniv Raz. In 2011 she was dating Jason Silva.