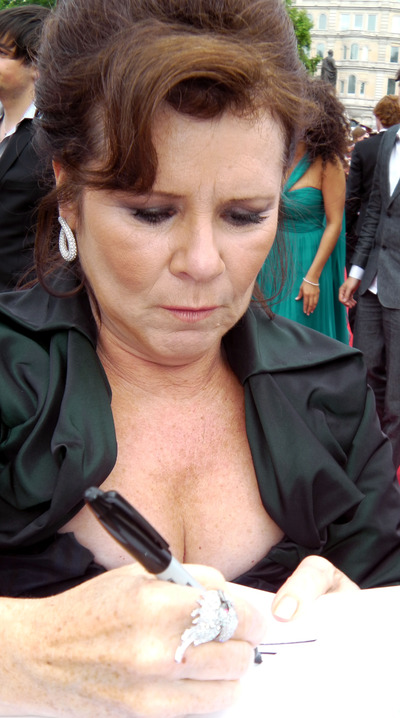 Imelda Mary Philomena Bernadette Staunton, OBE (born 9 January 1956) is a British actress of stage and screen. A 1976 graduate of the Royal Academy of Dramatic Art (RADA), she is a BAFTA Award winner and three-time Olivier Award winner.

Staunton began her career in repertory theatre, before joining the National Theatre in 1982. She won the 1985 Olivier Award for Best Supporting Performance for her work in A Chorus of Disapproval and The Corn is Green, and the 1991 Olivier Award for Best Actress in a Musical for Into the Woods. On television, she starred in the sitcoms Up the Garden Path (1990–93) and Is it Legal? (1995–98).

She drew critical acclaim for the title role in the 2004 film Vera Drake, for which she won the BAFTA Award for Best Actress and the Volpi Cup for Best Actress at the Venice Film Festival. The role also earned her a Best Actress Oscar nomination. Her other film roles include Nurse in Shakespeare in Love (1998), Mrs. Blatherwick in Nanny McPhee (2005), Dolores Jane Umbridge in two of the Harry Potter films (2007–10) and Hefina Headon in Pride (2014). In 2011, she starred as Mrs Lovett in the National Theatre's revival of Sweeney Todd: The Demon Barber of Fleet Street, winning a third Olivier Award. Other London stage roles include Adelaide in Guys and Dolls (1982), Sonia in Uncle Vanya (1988), Claire in A Delicate Balance (2011) and Rose in Gypsy (2014).

Staunton was born in Archway, North London, the only child of Bridie (née McNicholas), a hairdresser, and Joseph Staunton, a road-worker and labourer. The family lived over Staunton's mother's hair dressing salon while Staunton's father worked on the roads. Both of her parents were first-generation Catholic immigrants from County Mayo, Ireland, with her father coming from Ballyvary and her mother from Bohola. Staunton's mother was a musician who could not read music, but could master almost any tune by ear on the accordion or fiddle and had played in Irish showbands.

Staunton attended La Sainte Union Convent School, an all-girls Catholic school on the edge of Parliament Hill, Highgate Road, from years 11 to 17. Her talent was spotted by Jacqueline Stoker, her elocution teacher.[citation needed] Before long she was starring as Polly Peachum in a school production of The Beggar's Opera. Staunton studied at the Royal Academy of Dramatic Art.

When she was 18, Staunton enrolled at the Royal Academy of Dramatic Art (RADA) and studied alongside Alan Rickman, Timothy Spall and Juliet Stevenson. She graduated two years later in 1976, then spent six years in English repertory, including a period at the Northcott Theatre, Exeter where she had the title role in Shaw's Saint Joan (1979). In 1982, she moved on to the National Theatre. She has stated that her first job was a play by Goldoni. She is also known for her performance as Dorothy in The Wizard of Oz for the Royal Shakespeare Company. She has had a long and distinguished career in the theatre, performing in such diverse plays as A Man for all Seasons, Mack & Mabel, Side by Side, and Elektra.

Staunton also appeared in a National Theatre 80th birthday tribute to Lord Olivier, Happy Birthday, Sir Larry on 31 May 1987 in the presence of Olivier.

Staunton has won three Olivier Awards, Britain's highest theatre honour,[citation needed] the first in 1985 for roles in two productions: A Chorus of Disapproval and The Corn Is Green. Her second was for the 1991 musical, Into the Woods. She was nominated for her performance as Miss Adelaide in the 1996 revival of Guys and Dolls at the National Theatre. More recently, she appeared in the premiere of Frank McGuinness's There Came a Gypsy Riding at the Almeida in 2007 and opened in 2009 in English Touring Theatre's production of Entertaining Mr Sloane alongside Mathew Horne at the Trafalgar Studios.

Staunton shared a Screen Actors Guild Award for Best Performance by a Cast in 1998 for Shakespeare in Love. In 2004, she received the Best Actress honours at the European Film Awards, the BAFTAs, and the Venice Film Festival for her performance of the title role in Mike Leigh's Vera Drake, which also won Best Picture. For the same role, she received Best Actress nominations for the 2004 Golden Globes and Academy Awards.

In 1993, she appeared on television alongside Richard Briers and Adrian Edmondson in If You See God, Tell Him. Staunton also played the wife of Detective Burakov in the 1995 HBO movie, "Citizen X," which recounted the pursuit and capture of Russian serial killer Andrei Chikatilo. She has had other television parts in The Singing Detective (1986), Midsomer Murders, and the comedy drama series Is It Legal? (1995–98), as well as A Bit of Fry and Laurie. She was a voice artist on Mole's Christmas (1994). She had a guest role playing Mrs. Mead in Little Britain in 2005, and in 2007 played the free-thinking gossip, Miss Pole, in Cranford, the five-part BBC series based on Mrs Gaskell's novels. In 2011, she played Grace Andrews in the second series of Psychoville. In 2011, she was the Voice of the Interface in the highly acclaimed and nominee for the Hugo Award for Best Dramatic Presentation (Short Form) episode of Doctor Who - The Girl Who Waited.

Staunton met her husband, English actor Jim Carter, in Richard Eyre's landmark early 1980s production of Guys And Dolls at the National Theatre. They have a daughter, Bessie, born in 1993. In 2007, the couple, together with Bessie, appeared in the BBC series Cranford (Carter was Captain Brown and Bessie a maid).

Staunton was awarded the OBE (Officer of the Order of the British Empire) in the 2006 New Year Honours for her services to drama.