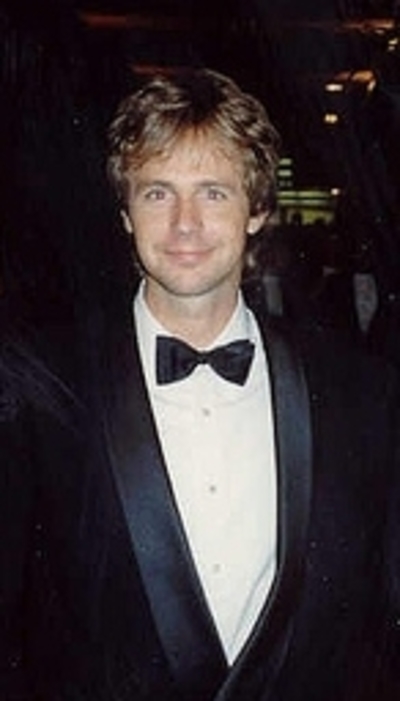 Dana Thomas Carvey (born June 2, 1955) is an American actor and stand-up comedian known for his work as a cast member on Saturday Night Live and for playing the role of Garth Algar in the Wayne's World films.

He is well known for his impersonations of George H. W. Bush and Ross Perot on Saturday Night Live. He is also known for playing The Church Lady and Hans from Hans and Franz on SNL; both are original SNL characters.

Carvey was born in Missoula, Montana, the son of Billie Dahl, a schoolteacher, and Bud Carvey, a high-school business teacher. Carvey is the brother of Brad Carvey, the engineer/designer of the Video Toaster. The character Garth Algar is loosely based on Brad. Carvey has English, German, Irish, Norwegian, and Swedish ancestry, and was raised Lutheran. When he was three years old, his family moved to San Carlos, California, in the San Francisco Bay Area. He received his first drum kit at an early age. He attended Tierra Linda Junior High in San Carlos, Carlmont High School in Belmont, California (where he was a member of the Central Coast Section champion cross country team), College of San Mateo in San Mateo, California, and received his bachelor's degree in broadcast communications from San Francisco State University.

He had a minor role in Halloween II, and co-starred on One of the Boys in 1982, a short-lived television sitcom that also starred Mickey Rooney, Nathan Lane, and Meg Ryan. In 1984, Carvey had a small role in Rob Reiner's film This Is Spinal Tap, in which he played a mime, with fellow comedian Billy Crystal (who tells him "Mime is money!"). He also appeared in the short-lived film-based action television series Blue Thunder.

In 1986, Carvey became a household name when he joined the cast of NBC's Saturday Night Live. He, along with newcomers Phil Hartman, Kevin Nealon, Jan Hooks, and Victoria Jackson, helped to reverse the show's declining popularity and made SNL "must-see" TV once again. An important part of the show's revival was Carvey's breakout character, The Church Lady, the uptight, smug, and pious host of Church Chat. Carvey said he based the character on women he knew from church while growing up, who would keep track of other churchgoers' attendance. He became so associated with the character that later cast members such as Chris Farley referred to Carvey simply as "The Lady".

Carvey's other original characters included Garth Algar (from Wayne's World), who was based on his brother, Hans (from "Hans and Franz"), and The Grumpy Old Man (from Weekend Update appearances). Throughout the election and presidency of George H. W. Bush, he was the designated impersonator of the president, making him the lead actor of the regular political sketches on SNL.

During the 1992 US presidential election campaign, Carvey also did an impression of independent candidate Ross Perot; in a prime-time special before the election, Carvey played both George H. W. Bush and Perot in a three-way debate with Bill Clinton, played by Phil Hartman. As Perot—prerecorded and timed to give the appearance of interacting with the live Bush and Clinton—Carvey eschewed the show's signature "Live from New York" opening line, telling Bush "Why don't you do it, live-boy?" Carvey left SNL in 1993.

Carvey's SNL work won him an Emmy Award in 1993 for Outstanding Individual Performance in a Variety or Music Program. He has a total of six Emmy nominations. Carvey has returned to host SNL four times, in 1994, 1996, 2000, and 2011.

NBC executives hoped to get Carvey to take over the 12:30 am ET weeknight spot in the network's lineup in 1993 when David Letterman left his show, Late Night with David Letterman, for an 11:30 pm ET show on CBS. The 12:30 spot eventually went to Conan O'Brien.

In 1994, Carvey starred in the film Clean Slate. The following year, Carvey filmed his first HBO stand-up special Critic's Choice. The show featured Carvey doing many of his SNL impersonations, as well as making fun of the premium channel's name, pronouncing it "hobo".

He had to turn down a role in Bad Boys because he felt overwhelmed as a new father.

He reprised many of his SNL characters in 1996 for The Dana Carvey Show, a short-lived prime-time variety show on ABC. The show was most notable for launching Robert Smigel's cartoon "The Ambiguously Gay Duo", as well as the careers of Steve Carell and Stephen Colbert.

In 2002, he returned to films in the spy comedy The Master of Disguise. Released a week after former colleague Mike Myers' successful (and similar) film Austin Powers in Goldmember, most critics compared the movies and panned Carvey's effort. However, the movie did manage about $40 million at the North American box office. In March 2007, aggregate review website Rotten Tomatoes ranked the film as the 18th worst-reviewed movie of the 2000s decade, with a 1% fresh rating. Comedian and former Mystery Science Theater 3000 host Michael J. Nelson named the film the third-worst comedy ever made. Carvey did not appear in a film again until 2011's Jack and Jill. It, too, is considered one of the worst comedies of all time. He had previously appeared in another Adam Sandler film, Little Nicky.

He is number 90 on Comedy Central's list of the 100 Greatest Stand-Ups of All Time.

In 1979, while performing at The Other Cafe in San Francisco, Carvey met Paula Zwagerman. They became engaged in 1980 and married in 1983. The couple have two children.