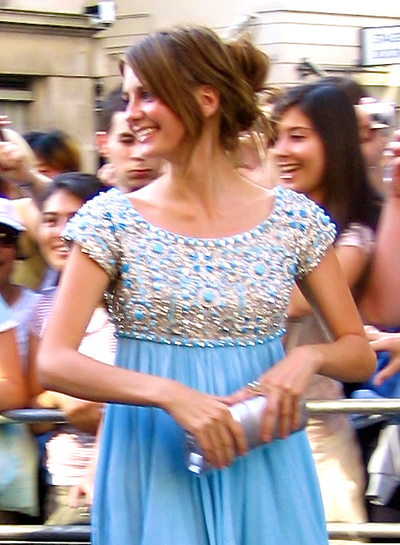 Mischa Anne Barton (born 24 January 1986) is an English-Irish film, television, and stage actress, and occasional fashion model with British, Irish, and American citizenship. She began her acting career on the stage, appearing in Tony Kushner's Slavs! and took the lead in James Lapine's Twelve Dreams at New York's Lincoln Center. She made her screen debut with a guest appearance on the American soap opera All My Children (1996). She then voiced a character on the Nickelodeon cartoon series KaBlam! (1996–1997). Her first major film role was as the protagonist of Lawn Dogs (1997), an acclaimed drama co-starring Sam Rockwell. She continued acting, appearing in major box office pictures such as the romantic comedy, Notting Hill (1999) and M. Night Shyamalan's psychological thriller, The Sixth Sense (1999). She also starred in the critically acclaimed indie crime drama Pups (1999).

She later appeared in the independent drama, Lost and Delirious (2001) and played Evan Rachel Wood's girlfriend during a guest-arc on ABC's Once and Again (2001–2002). She is best known for her role as Marissa Cooper in the Fox television series The O.C. (2003–2006), for which she received two Teen Choice Awards and a Prism Award nomination. The role catapulted Barton into mainstream fame, and Entertainment Weekly named her the "It Girl" of 2003.

She has since appeared in the comedy remake St Trinian's (2007), the Richard Attenborough-directed drama Closing the Ring (2007) and Assassination of a High School President (2008). She returned to television, starring in the short-lived Ashton Kutcher-produced CW series, The Beautiful Life: TBL (2009). In 2012, she returned to the stage, performing in the Irish production of Steel Magnolias.

Mischa Barton was born in Hammersmith, London, to an Irish mother, Nuala (née Quinn), a photographer, and an English father, Paul Marsden Barton, a foreign exchange broker from Manchester. Barton's grandfather on her mother's side was a Gaelic language professor at the University of Belfast. She has two sisters, younger Hania Barton and elder Zoe, a barrister in London. Barton has stated that she briefly attended St. Paul's Girls' School in Hammersmith,[8] but her father's work took the family to New York City when Barton was five years old. In 2006, ten days after her twentieth birthday, she became a naturalised citizen of the United States. She has retained her British citizenship and, says in reference to her English roots, "I actually feel more comfortable in England a lot of the time", yet stresses that, "People assume that I'm from Orange County [...] Marissa [Barton's character on The OC] hasn't seen much outside of her bubble, I like people to discern that I'm an English-Irish girl who grew up in New York City and who moved around a lot with her dad's job."

Barton graduated from the Professional Children's School in Manhattan in 2004, and took a summer short course called Acting Shakespeare at The Royal Academy of Dramatic Art in London, in June and July 2006, at Sir Richard Attenborough's urging, after he directed her in Closing the Ring.

Barton began acting at the age of eight, co-starring in the Off-Broadway premiere of the 1994 play, Slavs!, written by Tony Kushner. Vincent Canby of The New York Times praised Barton's "so fine" and "chillingly authoritative" performance. New York magazine also praised her as "a darling little girl, [that] exhibits consummate charm". She appeared in several other Off-Broadway productions, taking a lead role in James Lapine's Twelve Dreams alongside Marisa Tomei at Lincoln Center. Canby again praised Barton, noting that she "has a sweet gravity as the doomed Emma".

She made her film debut in Lawn Dogs, which won awards at film festivals around the world. Barton won critical favour for her role, with Janet Maslin of The New York Times praising her "poised" performance and Empire celebrating her "hypnotic central performance". Barton then appeared in Notting Hill (1999) and The Sixth Sense (1999). Both films were critically and commercially successful, respectively earning $363,889,700 and $672,806,292. She also starred in Pups, a "Bonnie and Clyde for the MTV generation", alongside Burt Reynolds; along with her co-star Cameron Van Hoy, film critic Roger Ebert called their work in the film "two of the most natural and freed performances I have seen by actors of any age."

Barton first appeared on television in 1994, playing a young Corvina Lang in flashbacks in the soap opera All My Children. In 1996, she returned to the show, replacing Michelle Trachtenberg in the role of Lily Benton Montgomery. She guest-starred in eight episodes of the television series Once and Again as Jessie Sammler's (Evan Rachel Wood) girlfriend, Katie Singer. In 2001, she returned to film and starred in the independent Canadian drama, Lost and Delirious, based on the novel The Wives of Bath by Susan Swan. The film was met with mixed reviews, but the performances of Barton and her co-stars Piper Perabo and Jessica Paré were widely praised. She also starred in Julie Johnson (2001) alongside Lili Taylor and Courtney Love, playing the daughter of a woman in a lesbian relationship. Barton also had a supporting role in the independent teen drama Tart (2001) with Brad Renfro and Dominique Swain.

In August 2003, Fox premiered the television series The O.C., about affluent teenagers with stormy personal lives who reside in scenic Orange County, California. The show became an overnight success due to its large fanbase, and resulted in Barton's fame being increased through her role as Marissa Cooper. Barton departed from the show in the third-season finale in May 2006. During her time on the show, Barton garnered several Teen Choice Awards. She was also celebrated by Glamour as the "Next Big Thing" and as Entertainment Weekly's "It Girl 2003" in the magazine's "It List" for top Creative People in Entertainment. The O.C. dropped in ratings dramatically during its third and fourth seasons, and ended in early 2007.

Barton purchased a house in Los Angeles at age nineteen, which she shares with her parents; she splits her time between there and apartments in London and New York.

Barton's previous boyfriends have included Cisco Adler, Taylor Locke, Jamie Dornan, Brett Simon, and Brandon Davis (grandson of Marvin Davis). In mid-2007, she briefly dated magician Brandon Silverfield, making a number of appearances as a special guest assistant in his Las Vegas magic show being beheaded by a guillotine and sawed in half in his "Impossible Sawing" illusion. In December 2008, there were reports that she was dating The Kooks frontman Luke Pritchard. The reports were confirmed during the relationship by Pritchard; Barton only confirmed the relationship after the pair split in March 2009, writing on her blog: "I think Luke is a great guy, but the type better suited as a friend. We have a surprising amount of mutual friends in England and I don't regret our time together, I just couldn't keep it going."