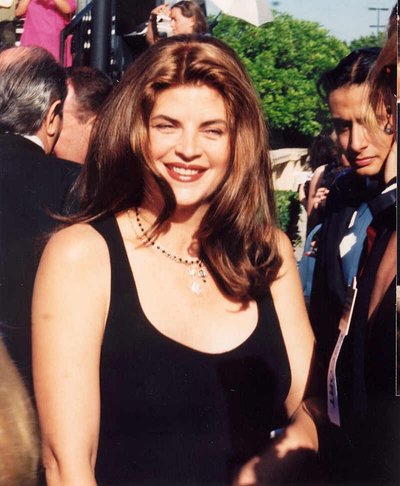 Kirstie Louise Alley (born January 12, 1951) is an American actress and comedian known for her role in the TV series Cheers, in which she played Rebecca Howe from 1987 to 1993, winning an Emmy Award and a Golden Globe Award as the Outstanding Lead Actress in a Comedy Series in 1991. She is also known for her role in the thriller Shoot to Kill and the Look Who's Talking film series as Mollie Ubriacco. More recently, Alley has appeared in reality shows revolving around her life.

Kirstie Alley was born in Wichita, Kansas, the daughter of Lillian Mickie (née Heaton), a homemaker, and Robert Deal Alley, who owned a lumber company. Alley is of Irish descent. She has two siblings, Colette and Craig. Alley attended Wichita Southeast High School, graduating in 1969. She attended college at Kansas State University in 1969. Kirstie came to Los Angeles to work as an interior designer and appeared as a contestant on the popular game show Match Game in 1979, where she won multiple games. She also appeared on the game show Password Plus in 1980. In 1981, a car accident caused by a drunk driver killed her mother and left her father seriously injured. Her father eventually recovered.

Alley made her movie debut in 1982 in Star Trek II: The Wrath of Khan, playing the Vulcan Starfleet officer Lieutenant Saavik. In 1989, Alley starred in Look Who's Talking alongside John Travolta; the film grossed over $295,000,000 worldwide. They then went on to make two other films centered around the same theme, Look Who's Talking Too and Look Who's Talking Now!

Alley has won two Emmy Awards during her career. Her first two nominations for her work on Cheers did not earn her the award, but her third, in 1991, garnered her the statuette for that series. In her speech, she thanked then-husband Parker Stevenson, calling him "the man who has given me the big one for the last eight years."

For contributions to the motion picture industry, Alley was honored with a star on the Hollywood Walk of Fame at 7000 Hollywood Boulevard.

Alley met and dated a distant cousin, Bob Alley, in high school. They married in 1970; her husband thus had the same name as her father. However, they divorced seven years later as their career paths diverged. Alley was married to her second husband, Parker Stevenson (Richard Stevenson Parker, Jr.) on December 22, 1983. They divorced in 1997. Alley and Stevenson share custody of their two children, William True and Lillie Price.