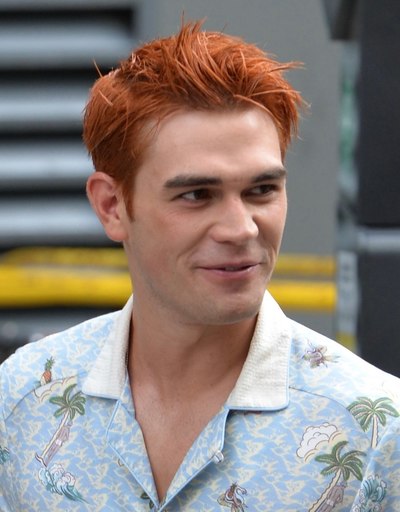 Keneti James Fitzgerald Apa (born 17 June 1997) is a New Zealand actor. In 2017, he began starring as Archie Andrews in the CW drama series Riverdale. He also starred as Kane Jenkins in the primetime soap opera Shortland Street and as teenage Ethan Montgomery in the comedy-drama film A Dog's Purpose.

Keneti James Fitzgerald Apa was born on 17 June 1997 in Auckland, the son of Keneti and Tessa Apa (née Callander). His father is Samoan and a matai (chief) of his village in Samoa; his mother is a European New Zealander. He has two older sisters, and is the nephew of former rugby union player and coach Michael Jones. He attended high school at King's College in Auckland before embarking on his acting career.

From 2013 to 2015, Apa starred as Kane Jenkins in the New Zealand prime-time soap opera Shortland Street. In 2016, Apa was cast as Archie Andrews in the CW drama series Riverdale, after a four-month worldwide talent search.

In 2017, he starred as teenage Ethan Montgomery in the comedy-drama film A Dog's Purpose, which was released on the same day as Riverdale premiered on television. Apa's next film role was replacing Kian Lawley in The Hate U Give (2018). Apa stars as Griffin in the Netflix film The Last Summer, which was released on 3 May 2019.

Apa was raised in a Christian family, and has stated that he is a Christian himself, expressing on social media that "I need God everyday."

Apa was involved in a minor car accident in Vancouver in September 2017, but was uninjured when the passenger side of his car hit a light pole. The event was reportedly the result of Apa falling asleep at the wheel after a long shoot the previous night.