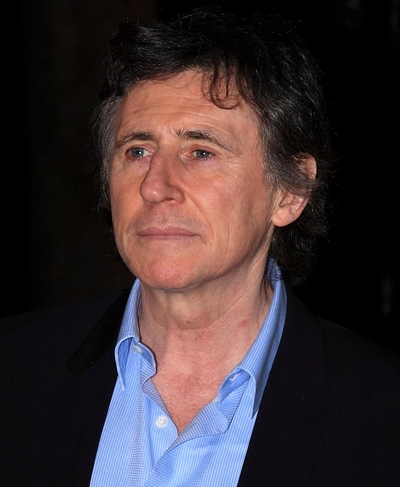 Gabriel James Byrne (born 12 May 1950) is an Irish actor, film director, film producer, writer, cultural ambassador and audiobook narrator. His acting career began in the Focus Theatre before he joined London's Royal Court Theatre in 1979. Byrne's screen debut came in the Irish soap opera The Riordans and the spin-off show Bracken. He has now starred in over 35 feature films, such as The Usual Suspects, Miller's Crossing, Stigmata and End of Days, in addition to writing two. Byrne's producing credits include the Academy Award-nominated In the Name of the Father. More recently, he has received much critical acclaim for his role as Dr. Paul Weston in the HBO drama In Treatment.

Byrne, the first of six children, was born in Walkinstown, Dublin 12, Dublin, Ireland, the son of acooper and soldier, Dan, and a hospital nurse from Elphin, Eileen (née Gannon). He has four siblings: Donal, Thomas, Breda, and Margaret; another, Marian, died at a young age. Byrne was raised a strict Roman Catholic and educated in Ardscoil Éanna in Crumlin, where he later taught Spanish and History. About his early training to become a priest, he said in an interview, "I spent five years in the seminary and I suppose it was assumed that one had a vocation. I realised subsequently that I didn't." He attended University College Dublin, where he studied archaeology and linguistics, becoming proficient in Irish. He played football in Dublin with the Stella Maris Football Club, in Drumcondra.

In January 2011, he spoke in an interview on The Meaning of Life about being sexually abused by priests during his childhood.

Byrne worked in archaeology when he left UCD. He maintained his love of his language, later writing the first television drama in Irish, Draíocht, on Ireland's national Irish-language television station,TG4, when it began broadcasting in 1996.

Before becoming an actor, Byrne had many jobs, including archaeologist, cook, and Spanish and History schoolteacher at Ardscoil Éanna in Crumlin, Dublin. He started acting at age 29, and began his career on stage with the Focus Theatre and the Abbey Theatre in Dublin. He later joined the Performing Arts Course in Sandymount Dublin 4 (Roslyn Park College) . Byrne came to prominence on the final season of the Irish television show The Riordans, subsequently starring in his own spin-off series, Bracken. His first play for television was Michael Feeney Callan's Love Is ... (RTE). He made his film debut in 1981, as King Uther Pendragon in John Boorman's King Arthurepic, Excalibur.

In 1983, he appeared with Richard Burton in the miniseries Wagner (1983), co-starring Laurence Olivier, John Gielgud and Ralph Richardson. In 1985, Byrne starred in the acclaimed political thriller Defence of the Realm, though he subsequently claimed he had been upstaged by his co-star, veteran actor Denholm Elliott: "I amended the actor's cliché to 'Never work with children, animals or Denholm Elliott'."

Upon his return to theatre in 2008, he appeared as King Arthur in Camelot with the New York Philharmonic from 7 to 10 May, following the footsteps of veteran actors Richard Burton and Richard Harris.

Byrne starred as therapist Dr. Paul Weston in the critically acclaimed HBO primetime weeknight series In Treatment from 2008 to 2010. He was named as TV's "latest Dr. McDreamy" by the New York Times for this role, and won the Golden Globe Award for Best Actor in a Drama Series in 2008. He also received his first Emmy Award nomination (Best Lead Actor in a Drama Series) for the 60th Primetime Emmy Awards (Bryan Cranston of Breaking Bad won.) that same year.

Byrne, who retains his Irish citizenship, did not arrive in the United States until 1987, when he was 37. He had begun a relationship with actress Ellen Barkin, and had relocated to New York City to be with her. A year later, in 1988, Byrne married Barkin, with whom he has two children, John "Jack" Daniel (born 1989) and Romy Marion (born 1992). The couple separated amicably in 1993, and then divorced in 1999.