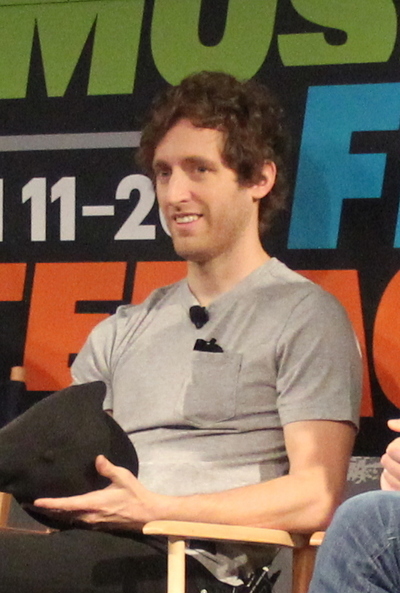 Thomas Middleditch (born March 10, 1982) is a Canadian actor, comedian, and television writer, known for his lead roles as Justin Frost in the 2009 romantic comedy Splinterheads and as Richard Hendricks in the HBO series Silicon Valley.

Middleditch was born and raised in Nelson, British Columbia. His parents are British. He was put into a play in grade eight that he said "changed everything" for him. He went from an indoorsy kid who was bullied, to becoming the funny, popular kid in high school, even being voted Valedictorian. He discovered improv in grade school from performing with Theatresports.

He briefly attended the University of Victoria before dropping out and moving to Toronto where he auditioned for and enrolled in George Brown College, but never attended classes. He instead opted to make sketches on his own, and worked at a New Balance selling shoes for an income.

He relocated to Chicago where he took classes at The Second City and iO Theater, while also performing regularly. Due to immigration issues, he worked various cash jobs until Charna Halpern sponsored him to get his work visa.

While performing on a Second City cruise, he got an audition for Saturday Night Live. Though he did not get cast, the routine he used in his audition landed him a network holding deal and he moved to New York City.

While living in NYC, Middleditch began acting in commercials. In 2007 a sketch video for Chicken McNuggets he made with Fernando Sosa in Chicago was purchased by McDonalds and used as a commercial.

He appeared in the 2009 romantic comedy Splinterheads as lead role of Justin Frost.

On March 25, 2010, he joined a CBS pilot Hitched, written by Josh Schwartz and directed by Rob Greenberg.

On May 31, 2011, Middleditch joined the cast of the Paramount Pictures' comedy film Fun Size, directed by Josh Schwartz. On August 8, 2011, he joined Road to Nardo, a film that would have been Scot Armstrong's directorial debut. On December 12, 2011, he joined Jay Roach's The Campaign, starring Will Ferrell and Zach Galifianakis. In autumn of the same year, he pitched a cartoon called Worst Friends Forever to MTV, but it never made it to air.

On July 23, 2012, Middleditch joined the cast of the comedy film Someone Marry Barry, directed and written by Rob Pearlstein and produced by Barry Josephson. On August 23, 2012, he had a role on The Office's final season episode "The Farm".

He had a role in the 2013 comedy fantasy film The Brass Teapot, directed by Ramaa Mosley, and played a police officer in the 2013 CBS Films coming-of-age comedy Toy's House, later re-titled The Kings of Summer.

He has said that the pilot was written with him specifically in mind as the lead (the character was originally named Thomas Pickering; the latter being his mother's maiden name). This was a result of a "random" audio sketch he once made for a stand-up routine which he would later animate himself and pitched to several people, including Mike Judge's production partners John Altschuler & Dave Krinsky, who would later create the show.

For his work on the show, Middleditch has garnered two Satellite Awards nominations and two Critics' Choice Television Award nominations. The show won the award for Best Comedy Series at the 5th Critics' Choice Television Awards and at the 20th Satellite Awards. Both Season 1 and Season 2 have been nominated for the Primetime Emmy Award for Outstanding Comedy Series, and the show also received its first Golden Globe Award nomination for Best Comedy Series, which it lost to Transparent. Despite the show's critical acclaim, it is yet to garner an acting nomination, including for Middleditch, at either awards show.

Middleditch and his wife, costume designer Mollie Gates have been together since 2012, and became engaged in June 2015. They were married on August 22, 2015 in Middleditch's hometown.

Middleditch has described his own upbringing as agnostic. He believed in a "classic Christian religion" at a young age, but is now an atheist.