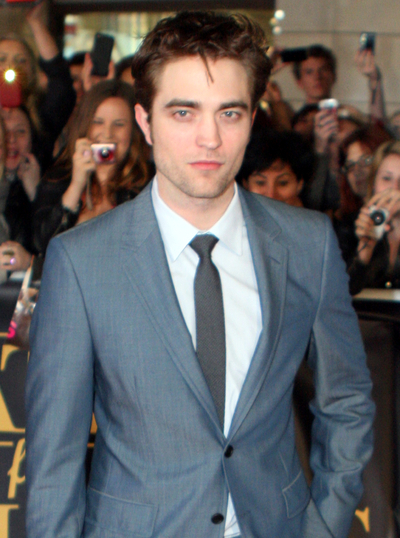 Pattinson started his film career by playing Cedric Diggory in Harry Potter and the Goblet of Fire, a 2005 fantasy film. He later got the leading role of vampire Edward Cullen in the film adaptations of the Twilight novels by Stephenie Meyer, which consisted of five films between 2008 and 2012 that combined grossed over $3.3 billion in worldwide receipts. Twilight brought Pattinson worldwide fame, and established him among the highest paid and most bankable actors in Hollywood. In 2010, Pattinson was named one of TIME magazine's 100 Most Influential People in The World, and also in the same year Forbes ranked him as one of the most powerful celebrities in the world in the Forbes Celebrity 100.

In 2009, he portrayed Salvador Dalí in Little Ashes. That same year, a documentary film, Robsessed, about the actor's fame and popularity, was released. He appeared as a troubled young man in Remember Me (2010) and also starred in a romantic drama, Water for Elephants (2011). His performance as a tough, cold-hearted and calculating billionaire in David Cronenberg's Cosmopolis (2012), earned him critical praise. He gained critical appreciation for his performances in David Michod's futuristic western The Rover (2014), in Cronenberg's satire drama Maps to the Stars (2014), in Werner Herzog's biopic film Queen of the Desert (2015) and in Anton Corbijn's Life (2015), a drama film about Life Magazine photographer Dennis Stock and James Dean. He will appear in James Gray's The Lost City of Z, about an explorer who disappeared in the Amazon while looking for an ancient city.

Pattinson composes and plays his own music. He sang in the Twilight film series and How to Be, a 2008 independent comedy-drama film. He is a supporter of ECPAT (End Child Prostitution, Child Pornography and Trafficking of Children for Sexual Purposes), Parents and Abducted Children Together (PACT), and the GO Campaign, a nonprofit organization that raises awareness and funds to help orphans and vulnerable children throughout the world, of the latter he became ambassador in 2015 to help raise international awareness of the non-profit organization. He is a member of International Medical Corps and has promoted and shared details about cancer through Public service announcements to raise awareness about the disease.

Pattinson was born in London. His father, Richard, imported vintage cars from America, and his mother, Clare, worked for a modelling agency. Pattinson has two elder sisters, Victoria and Lizzy Pattinson, the latter a singer. Growing up in the Barnes suburb of London, he attended Tower House School until he was twelve, and then The Harrodian School. He became involved in amateur theatre at the Barnes Theatre Company. He auditioned and was cast in a small role in Guys and Dolls. He next auditioned for Thornton Wilder's Our Town and was cast as George Gibbs. He also played in Anything Goes and Macbeth. He caught the attention of an acting agent in a production of Tess of the d'Urbervilles and began looking for professional roles.

Pattinson had supporting roles in the German made-for-television film Ring of the Nibelungs in 2004 and in director Mira Nair's costume drama Vanity Fair, although his scenes in the latter were deleted and only appear on the DVD version. In May 2005, he was scheduled to appear in the UK premiere of The Woman Before at the Royal Court Theatre, but was fired shortly before the opening night and was replaced by Tom Riley. Later that year he played Cedric Diggory in Harry Potter and the Goblet of Fire. For this role he was named that year's "British Star of Tomorrow" by The Times and had more than once been hailed as "the next Jude Law".

In 2006, Pattinson appeared in The Haunted Airman a psychological thriller, aired on BBC Four on 31 October, and he earned favourable reviews. The Stage praised his performance by saying that "(he) played the airman of the title with a perfect combination of youthful terror and world weary cynicism." On 19 February 2007, he appeared in a supporting role in a one-off television drama based on the best-selling novel by Kate Long, The Bad Mother's Handbook.

Breakthrough with The Twilight Saga and widespread recognition

In 2008, Pattinson landed the role of Edward Cullen in the film Twilight, based on Stephenie Meyer's best-selling novel of the same name. According to TV Guide, Pattinson was initially apprehensive about auditioning for the role of Edward Cullen, fearful that he would not be able to live up to the "perfection" expected from the character. The film was released on 21 November 2008 and turned Pattinson into a movie star overnight. Although the film received mixed reviews, critics praised his and co-star Kristen Stewart's chemistry in the film. The New York Times called Pattinson a "capable and exotically beautiful" actor and Roger Ebert said he was "well-chosen" for the role.

His other release of 2008, How to Be, was a low-budget comedy drama film written and directed by Oliver Irving. It screened at number of film festivals, earned mixed reviews from critics. Pattinson then starred as Salvador Dalí in the film Little Ashes, a Spanish-British drama directed by Paul Morrison.[ He also starred in a short film The Summer House directed by Daisy Gili. This short film later re-released as a part of an anthology film titled Love & Distrust, comprising five short films following eight individuals from diverse backgrounds on their quest for true contentment.

He reprised his role as Edward Cullen in the Twilight sequel The Twilight Saga: New Moon, which was released on 20 November 2009. The film earned a record-breaking $142,839,137 opening weekend and an overall run of $709,827,462 worldwide. Though the film received negative reviews, film critic Michael Phillips from the Chicago Tribune said that Pattinson was still "interesting to watch" despite the bad makeup. Bill GoodyKoontz from the Arizona Republic said that "Pattinson's actually not in the film that much, but he does his best when he's around" and Michael O'Sullivan of the Washington Post noted that his acting was "uniformly strong".

In 2009, Pattinson presented at the 81st Academy Awards. On 10 November 2009, Revolver Entertainment released the DVD Robsessed, a documentary which details Pattinson's life and popularity. His next film The Twilight Saga: Eclipse was released on 30 June 2010, earning $698,491,347 worldwide. The film received mixed reviews, Kirk Honeycutt of The Hollywood Reporter praised Pattinson's performance, stating that "(he) makes you forget the white makeup and weird eye contact lenses – to focus on a character torn between his love for the human Bella (Stewart) and the knowledge that she'll have to let go of her beating heart if she's to stay with him forever." Will Lawrence of Empire Online praised the performance of three leads of the film by saying that "All three corners of the love triangle look sharper than before: the most accomplished actor, Stewart, still lip-biting, Lautner still pec-flexing, and Pattinson not fully shaking that fiery-eyed pout. But all have grown into their roles, cutting loose in a film that (thankfully) sidesteps the melodrama of its prequels."

Pattinson was named one of the "Sexiest Men Alive" in 2008 and 2009 by People Magazine. In 2009, he was named the "Sexiest Man Alive" by Glamour UK. AskMen named Pattinson as one of the top 49 most influential men of 2009. In 2009, Vanity Fair named Pattinson "the most handsome man in the world" along with Angelina Jolie as the most beautiful woman in the world. Pattinson was named one of Vanity Fair's "Top Hollywood Earners of 2009" with estimated earnings of $18 million in 2009.

In 2008, Pattinson became romantically linked to co-star Kristen Stewart. For a long time, the two did not explicitly confirm a relationship, but paparazzi photographs and eyewitness accounts drove intense media and fan speculation and attention. However, Stewart officially acknowledged her relationship with Pattinson for the first time in July, 2012, when Us Weekly published photos of Stewart showing affection with her Snow White and the Huntsman director, Rupert Sanders, with what the Huffington Post called an "affair with...Sanders". The day that the photos were released, Stewart issued a public apology to Pattinson at People Magazine, saying, "I'm deeply sorry for the hurt and embarrassment I've caused to those close to me and everyone this has affected. This momentary indiscretion has jeopardized the most important thing in my life, the person I love and respect the most, Rob. I love him, I love him, I'm so sorry." After dodging the question repeatedly, Pattinson confirmed in an interview with Esquire UK in July 2014 that he and Stewart had split in 2012. There had been prior speculation that the couple broke up in May 2013, when Pattinson was seen removing personal items from Stewart's home.

In September 2014, Pattinson started dating London-based singer, songwriter and dancer FKA twigs. In April 2015, it was confirmed that Pattinson and FKA are engaged.