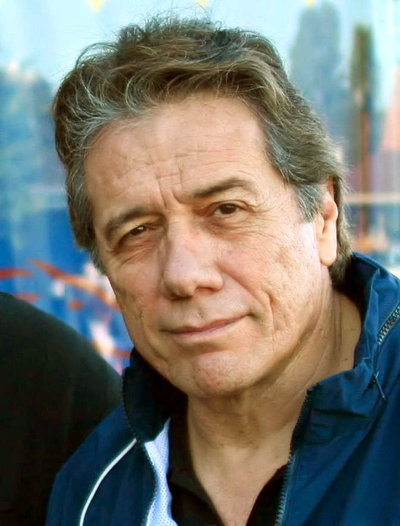 Edward James Olmos (born February 24, 1947) is a Mexican American actor and director. Among his most memorable roles are William Adama in the re-imagined Battlestar Galactica, Lt. Martin Castillo in Miami Vice, teacher Jaime Escalante in Stand and Deliver, patriarch Abraham Quintanilla in the film Selena, Detective Gaff in Blade Runner, and narrator El Pachuco in both the stage and film versions of Zoot Suit.

In 1988, Olmos was nominated for an Academy Award for Best Actor in a Leading Role for the film Stand and Deliver.

He has also been a longtime pioneer for more diversified roles and images of Latinos in the U.S. media. His notable direction, production and starring roles for films, made-for-TV movies and TV shows include American Me, The Burning Season, My Family/Mi Familia, 12 Angry Men, The Disappearance of Garcia Lorca, Walkout, The Wonderful Ice Cream Suit and American Family: Journey of Dreams.

Olmos was born Edward Olmos in Los Angeles, California, where he was raised, the son of Eleanor (née Huizar) and Pedro Olmos, who was a welder and mail carrier. His father was a Mexican immigrant and his mother was Mexican American. He grew up wanting to be a professional baseball player, and became the Golden State batting champion. In his teen years, he turned to rock and roll, and became the lead singer for a band he named Pacific Ocean, so-called because it was to be "the biggest thing on the West Coast." He graduated from Montebello High School in 1964. While at Montebello High School, he lost a race for Student Body President to future California Democratic Party Chair Art Torres. For several years, Olmos performed at various clubs in and around Los Angeles, and released a record in 1968. At the same time, he attended classes at East Los Angeles College, including courses in acting.

In the late 1960s and the early 1970s, Olmos branched out from music into acting, appearing in many small productions, until his big break portraying the narrator, called "El Pachuco," in the play Zoot Suit, which dramatized the World War II-era rioting in California brought about by the tensions between Mexican-Americans and local police. (See Zoot Suit Riots.) The play moved to Broadway, and Olmos earned a Tony Award nomination. He subsequently took the role to the filmed version in 1981, and appeared in many other films including Wolfen, Blade Runner and The Ballad of Gregorio Cortez.

In 1980, Olmos was cast in the post-apocalyptic science fiction film (now a Japanese cult classic) Virus (復活の日 Fukkatsu no hi), directed by Kinji Fukasaku and based on a novel written by Sakyo Komatsu. His role required him to play a piano while singing a Spanish ballad during the later part of the film. Although not a box office success, Virus was notable for being the most expensive Japanese film ever made at the time.

From 1984 to 1989, Olmos starred in his biggest role up to that date as the taciturn police Lieutenant Martin Castillo in the television series Miami Vice, opposite Don Johnson and Philip Michael Thomas. He was awarded a Golden Globe and an Emmy in 1985 for his work in the series. At this time, Olmos also starred in a short training video for the United States Postal Service entitled Was it Worth It?, a video about theft in the workplace. He was contacted about playing the captain of the USS Enterprise (NCC-1701-D) on Star Trek: The Next Generation when it was in pre-production in 1986, but he declined.

In 1971, Olmos married Katija Keel, the daughter of actor Howard Keel. They had two children, Bodie and Mico, before divorcing in 1992. Olmos also has four adopted children: Daniela, Michael D., Brandon and Tamiko. He married actress Lorraine Bracco in 1994, but she filed for divorce in January 2002 after five years of separation. In the same year, he married Puerto Rican actress Lymari Nadal. In 1996, he was awarded an honorary Doctorate of Fine Arts from California State University, Fresno. In 2007, after a seven-year process, he obtained Mexican nationality.

Asteroid 5608 Olmos is named in his honor.