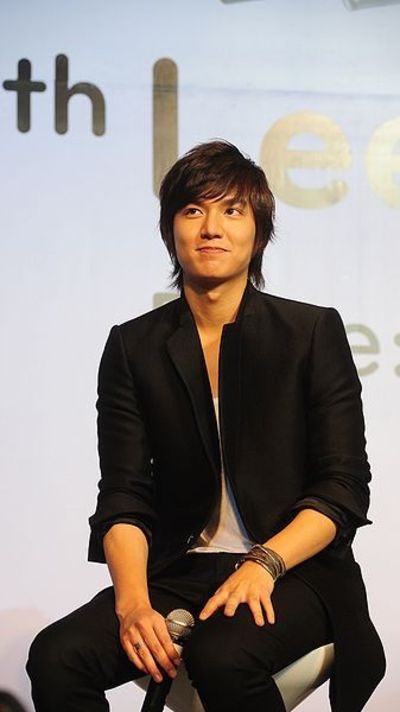 Despite the release of two albums, My Everything (2013) and Song For You (2014), Lee has stated that his music are for his fans only and that he does not wish to pursue a singing career. During their respective releases, he embarked on a tour throughout Asia to meet his fans.

Lee Min Ho was born in Heukseok-dong, Dongjak-gu, Seoul. As a child, Lee had hoped to become a professional football player. He was selected for the youth football class of South Korean manager and former player Cha Bum-Kun, but an injury in the 5th grade of elementary school put an end to his dream. Lee, however, still keeps up with football and has started that Cristiano Ronaldo is his favourite player. In his second year of high school, Lee turned to modelling and acting. After going through training, Lee started auditioning and landed minor roles in several television dramas such as Nonstop 5 and Recipe of Love. His official debut role was in an EBS series, Secret Campus. Early in his career Lee went by the stage name Lee Min because his agency thought his birth name was too ordinary. However, as his stage name was pronounced and written (Hangul) in the same way as the Korean word imin, which means "immigration", it made it hard for him to show up on internet search results. He eventually went back to using his original name.

In 2006, his acting career was put on hold for a year following a serious car accident in which he was severely injured and spent several months bedridden. Upon recovery, Lee received his first leading role in the high-school drama Mackerel Run in 2007, but the series was reduced to only eight episodes due to low viewership ratings. In 2008 he appeared in various roles on television (dramas Get Up and I Am Sam) and two movies, Public Enemy Returns and Our School's E.T.. During the shooting of the latter he became good friends with Kim Su-ro, who later praised him on a variety show: "I recognize a star when I see one. When I was doing Our School's E.T., I knew that Lee Min-ho would become one of the top actors in the country"

His breakthrough came in 2009 with the lead role of Gu Jun-pyo in Boys Over Flowers (KBS2), the Korean adaptation of the popular Japanese television drama Hana Yori Dango, which was based on the popular Shōjo manga, Boys Over Flowers. Competition for the leading role was very intense and Lee only got to know he was cast from the newspapers. The series made Lee a household name in South Korea, and was well-received throughout Asia.

In 2010 Lee followed up the success of Boys Over Flowers by starring in the MBC TV drama Personal Taste in which he played an ambitious perfectionist young architect who poses as a gay man to become roommates with a young woman leading to romantic complications. When asked about why he chose the role during an interview he responded "I think I would do a better job playing heavy and more defined roles when I am older. I think "Personal Taste" was perfect because it is bright, cheerful but you can also laugh and cry over it as well."

In 2011, he played the titular character in action drama City Hunter, which was loosely based on Tsukasa Hojo's popular manga. The drama's popularity throughout Asia has also contributed to Lee's growing popularity in Asia, most notably in Japan, Philippines and China and as well in parts of Europe. He participated in a popular Chinese variety show Happy Camp in December 2011, drawing a large number of fans to the recording. On April 6, 2012, Lee announced on his Facebook page that he would appear in a new drama called Faith, which aired from August to October 2012.

Lee has an older sister. He dated actress Park Min Young in 2011 whilst filming the drama series, 'City Hunter'. He is majoring in Film & Art at Konkuk University.