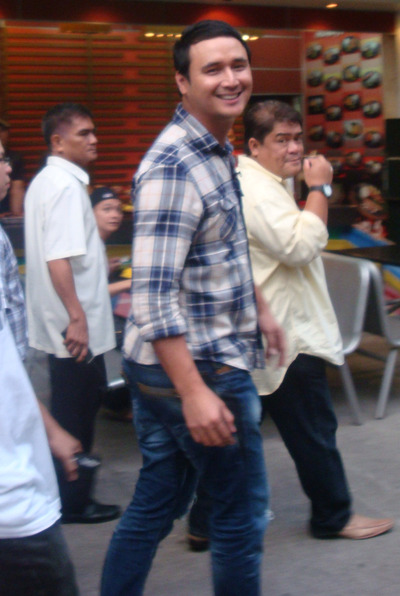 John Estrada (born June 13, 1974) is a Filipino movie and TV actor, starred in a number of roles as a leading man, comedian and villain. He is currently part of ABS-CBN contract actors.

Estrada was born in 1973 in Quezon City, Philippines, and grew up with his family at Isabela City, Basilan where his father (Vicente Estrada) was a Municipal Councilor and his mother (Lilia Estrada) a public school teacher. At an early age, he was regularly cast in a variety of school plays and presentations, usually taking on the lead roles.

He first made his foray in show business as a model having won a Body Shots competition early into his college years from Zamboanga to Metro Manila. However, his name gained publicity when he married actress Janice de Belen who bore him 4 children: Inah (b. 1992), Moira (b. 1993), Kaila (b. 1996), and Yuan (b. 1998).

Estrada became part of the ABS-CBN sitcom "Palibhasa Lalake" in 1990 and played minor roles in some films produced by Regal Films and Star Cinema. His biggest break in showbiz came in 1998 when he headlined the controversial ABS-CBN noontime show "Magandang Tanghali Bayan" (MTB) with Randy Santiago and Willie Revillame. His hosting job also cost him his marriage with Janice when he was linked to his "Magandang Tanghali Bayan" co-host Vanessa del Bianco. Janice and Estrada legally separated in 2001. The marriage was officially annulled in 2004.

In 2002, Estrada was chosen to play Boris opposite grand-slam actress Lorna Tolentino in the ABS-CBN soap "Kay Tagal Kang Hinintay". His foray into dramatic acting did not alienate him from the audiences who are used to see him cracking jokes on noontime TV. He was later named Best Drama Actor in 2003 Star Awards for Television. Soon after, when ABS-CBN decided to reformat "MTB" following Willie Revillame's termination, Estrada offered to resign from the show so that he could concentrate on acting. He was given another lead role in another ABS-CBN soap "Hiram" opposite Kris Aquino and Dina Bonnevie in 2004. However, Estrada did not stick to leading man roles after "Hiram". Instead, he tried his hand in doing villain roles in different soap operas on ABS-CBN.