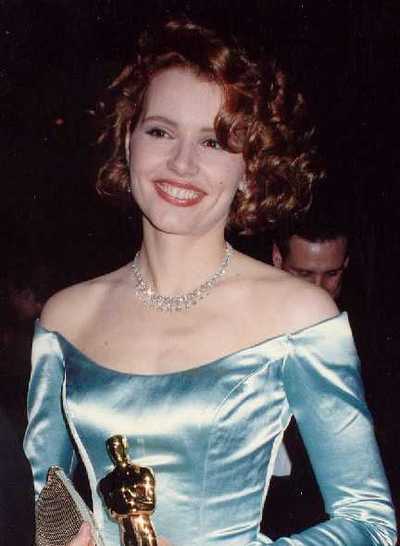 Virginia Elizabeth "Geena" Davis (born January 21, 1956) is an American actress, film producer, writer, former fashion model, and a women's Olympics archery team semi-finalist. She is known for her roles in Stuart Little, The Fly, Beetlejuice, Thelma & Louise, A League of Their Own, The Long Kiss Goodnight and The Accidental Tourist, for which she won the 1988 Academy Award for Best Supporting Actress. In 2005, she received the Golden Globe Award for Best Actress – Television Series Drama for her role in Commander in Chief.

Davis was born in Wareham, Massachusetts. Her mother, Lucille (née Cook), was a teacher's assistant, and her father, William F. Davis, was a civil engineer and church deacon; her parents had both been from small towns in Vermont. She has a brother named Danforth ("Dan"). At an early age, she became interested in music. She learned piano and flute and playedorgan well enough as a teenager to serve as an organist at her Congregationalist church in Wareham. Davis attended Wareham High School and was an exchange student in Sandviken, Sweden, becoming fluent in Swedish. Enrolling at New England College, she eventually graduated with a bachelor's degree in drama from Boston University in 1979. Davis is a member of Mensa, a social organization whose members are in the top 2% of intelligence as measured by an IQ test entrance exam.

Following her education, Davis served as a window mannequin for Ann Taylor until signing with New York's Zoli modeling agency in 1979. Davis auditioned for roles in many popular movies, including The Terminator’s Sarah Connor, which went to Linda Hamilton. She was working as a model when she was cast by director Sydney Pollack in his film Tootsie (1982) as a soap opera actress. She followed the role with the part of Wendy Killain in the short-lived television series Buffalo Bill, which aired from June 1983 to March 1984. She also wrote the Buffalo Bill episode entitled "Miss WBFL." During the run of Buffalo Bill, in 1983, Davis also appeared as Grace Fallon in an episode of Knight Rider entitled "K.I.T.T the Cat". Her television credits from the mid-1980s also include one episode of Riptide, three episodes of Family Ties, and an episode of Remington Steele. This was followed by a series of her own, Sara, which lasted thirteen episodes.

After roles in Fletch, The Fly, and Beetlejuice, Davis received an Oscar as Best Supporting Actress for her appearance in The Accidental Tourist (1988), and a Best Actress nomination for her role in Thelma & Louise (1991). Davis replaced Debra Winger in the role of Dottie in A League of Their Own (1992), and received a Best Actress Golden Globe Award nomination for her performance. She then co-starred in Hero alongside Dustin Hoffman and Andy Garcia.