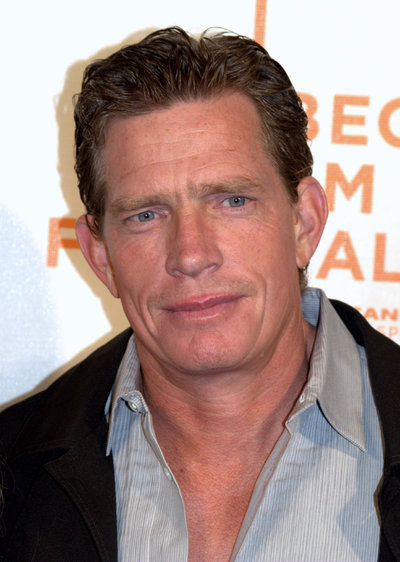 Thomas Haden Church (born Thomas Richard McMillen; June 17, 1960) is an American actor, director and writer. After co-starring in the 1990s sitcom Wings, Church became known for his film roles, including his performance in Sideways and his role as the Sandman in Spider-Man 3. He also made his directorial debut with Rolling Kansas.

Church was born in Woodland, California, the son of Maxine (née Sanders) and Carlos "Carl" Richard McMillen, who served for eight years in the Marines and saw action in the Korean War; after 1962, Carlos worked as a surveyor for Yolo County, California. Church's parents divorced and his mother moved to Texas. She remarried in 1969, to widower George A. Quesada, a veteran of an Army Air Forces reconnaissance unit which served in Guam in World War II. Church took his stepfather's surname briefly.[2] He was raised in Texas: first in Laredo, then in Harlingen. He left high school in 1977 to work in the oil fields of Louisiana, but he returned to graduate from Harlingen High School in 1979. He attended the University of North Texas while living in Dallas.

Church started in the entertainment business as a radio personality and doing voice-over work. He changed his name to "Thomas Haden Church", taking "Haden" and "Church" from his ancestry. A part in an independent film convinced him to move to California to pursue an acting career. He played the part of slow-witted aircraft mechanic Lowell Mather for six seasons (1990–1995) on the NBC sitcom Wings.

He worked in television for two more seasons with a lead role on Ned & Stacey opposite Debra Messing. He has had supporting roles in films such as Tombstone, George of the Jungle, and The Specials. Church often plays villains or comic relief in films, most evident by turns in Demon Knight and Over the Hedge. Church bought a ranch in Texas in 1998. In late 2000 he took a break from films. After having small roles in films such as Monkeybone and 3000 Miles to Graceland, he made his directorial debut with Rolling Kansas in 2003. He has voiceover work in commercials, such as for Merrill Lynch and Icehouse beer.

In 2003, director Alexander Payne called him regarding the role of "Jack", the selfish best friend to Paul Giamatti's character, in Sideways. During the audition, Church stripped naked to read the audition scene, later saying "To me it was painfully obvious... I was reading the scene where Jack comes in naked and there has to be in-born vulnerability in the scene." (He later found that he was the only actor to strip down for the audition). Sideways earned acclaim for Church. He won an IFP Independent Spirit Award and was nominated for the Academy Award for Best Supporting Actor.