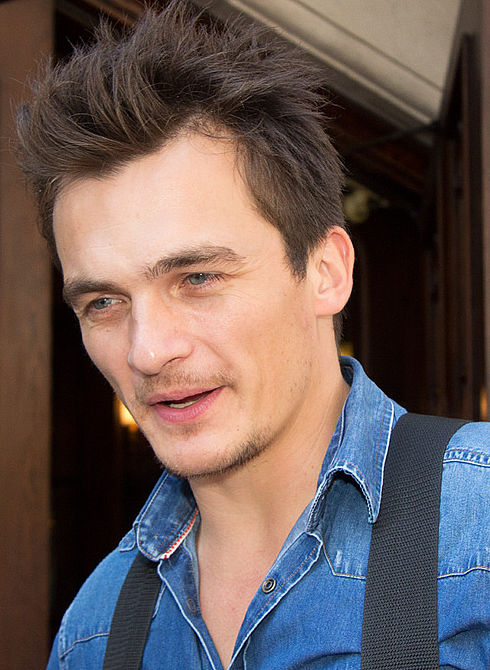 Rupert William Anthony Friend (born 1 October 1981) is an English actor, director, screenwriter, and producer. He is best known for his roles as Mr. Wickham in the 2005 film Pride and Prejudice, Lieutenant Kurt Kotler in the 2008 film The Boy in the Striped Pyjamas, Prince Albert in the 2009 film The Young Victoria, and Peter Quinn on the Showtime series Homeland. He will also star in the upcoming action film Hitman: Agent 47.

Friend was born and raised in Stonesfield, Oxfordshire, the son of Caroline, a solicitor, and David Oxton Friend, a cultural historian. He attended Marlborough School in Woodstock. He moved to take A-levels at the Cherwell School and d'Overbroeck's College in Oxford. Friend received his professional acting training at the Webber Douglas Academy of Dramatic Art in London. At that time, he considered himself a late starter: "I was about to set off sailing around the world when I heard I'd got into drama school. Everyone else there had grown up singing and dancing, whereas I was the opposite."

Originally wanted to be an archaeologist and travel around the world after watching Indiana Jones and the Last Crusade in a cinema in 1989, he scrapped the idea after realizing that the occupation is not as proficient as he had expected. Instead, he turned to acting, in which he was inspired by Harrison Ford, who played Indiana Jones, and Marlon Brando.

He previously played three minor roles in the film The Laramie Prjoect when he was in second year in his drama school, and was spotted by the film's casting director, who eventually introduced Friend to a larger role. He made his acting debut as Billy Downs in the 2004 film The Libertine from The Weinstein Company, for which he was named "outstanding new talent" at the 2005 Satellite Awards. In 2005, he also had his first starring role as Ludovic Meyer in the film adaption of Mrs Palfrey at the Claremont, which he star opposite Joan Plowright. In the same year, he portrayed Wickham in Joe Wright's version of Pride and Prejudice. In 2008, Friend and Tom Mison wrote and starred in a short film called The Continuing and Lamentable Saga of the Suicide Brothers. He founded his own production company called Beat Pictures, and he made his first directorial debut with a short film in 2010 called Steve, which starred Keira Knightley, Tom Mison and Colin Firth. In addition to directing, he also wrote and produced the film, which was later included in the 2012 compilation Stars in Shorts.

He also starred in the film Chéri and played the titular character. In addition, he joined the cast of The Boy in the Striped Pajamas, and played Kurt Kotler, a Lieutenant in Nazi Germany. In 2010, he played Albert, Prince Consort in Young Victoria. Graham King, producer of Young Victoria, chose Friend to star as the lead role because he remember Friend's strong performance in Pride and Prejudice. His performance received acclaim, in particular, historian Alex von Tunzelmann, who praise him for putting effort in mastering the role.

In 2010, Friend made his stage debut as Mitchell in the UK premiere of The Little Dog Laughed. He stars in the films The Kid, based on the novel by Kevin Lewis. As the film involves boxing, he had to train himself so as to improve his physical and psychological shape.[4] He also starred in a French film called Lullaby for Pi, where he played a singer called Sam. In 2011, he played Thomas Anders, the protagonist of the film 5 Days of War.

In 2014, Friend played Oliver Baumer in Fox Searchlight's film Starred Up. His performance was applauded by critics and was nominated for BIFA Award for Best Supporting Actor. In 2015, Friend starred as Agent 47 in Hitman: Agent 47, a film based on the Hitman video game franchise, replacing Paul Walker. In order to play the role, he had to shave all his hair. The production team also sent him copies of all the Hitman games for him to familiarize with the role.

He currently plays a major role as Peter Quinn in the multiple award winning political drama series Homeland. Introduced in season two as a minor supporting character, his role became significantly larger after season three. His performance received acclaim, in which he was nominated for three different awards. Friend is set to reprise his role as Quinn in the fifth season of Homeland, which will be filmed entirely in Berlin, Germany and will premier on 4 October 2015.

He began dating Aimee Mullins in 2013, and they became engaged in December 2014. Previously, Friend dated actress Keira Knightley, whom he met when filming Pride & Prejudice, from 2005 to December 2010.