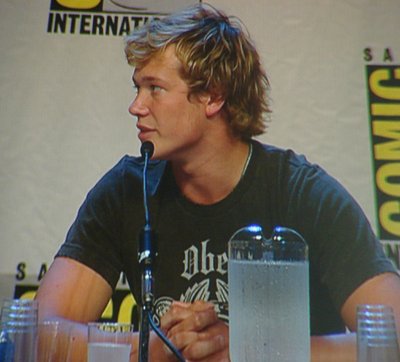 Edward John "Ed" Speleers (born 7 April 1988) is an English actor and producer. He is best known for playing the title role in the 2006 film Eragon, as well as starring in Golden Globe and Emmy award-winning TV series Downton Abbey.

Speleers was born at St Richard's Hospital, Chichester, West Sussex. His parents divorced when he was three. His mother, Gill, lives in Spain; his father, John, is a financial consultant and lives in London. He has two older half brothers. In 2006, he left Eastbourne College to portray Eragon.

Prior to Eragon, Speleers appeared in school productions, such as A Midsummer Night's Dream when he was 10, Peter Pan, A Streetcar Named Desire, Richard III and Hamlet. While at Eastbourne College, Speleers wrote a play, Retribution, with his friend Rob Curran, which investigated the subjects of child abuse and paedophilia. Speleers also acted in a short film by Charlie Bleakley, called Metropolis.

He then landed the lead role of the 20th Century Fox screen version of Eragon in 2006. In 2008, he appeared in the British prime time series Echo Beach as Jimmy Penwarden.

In mid 2010, Speleers was cast as one of the lead roles in British thriller film A Lonely Place to Die directed by Julian Gilbey, a feature film, starring Melissa George, Sean Harris and Eamonn Walker, released in September 2011 in Britain.

In 2012, Speleers was part of the comedy horror film Love Bite, in the lead role of Jamie, with Jessica Szohr and Timothy Spall. He was also cast in the film A Dead Man in Deptford, based on the novel of the same name by Anthony Burgess, and in the Golden Globe award winning series Downton Abbey, where he played the regular role of Jimmy Kent.

He got a lead big-screen role as Sam in thriller film Plastic, written and directed by Julian Gilbey for Gateway Films. Production was shot in Britain, Miami and Brunei from January 2013.

Speleers is represented in the USA by the IFA Talent Agency, and in Britain by the Independent Talent Group. His manager is Matthew Hobbs at Firefly.

On 12 March 2014 it was reported that Speleers was among five actors being considered for a lead role in Star Wars: The Force Awakens.