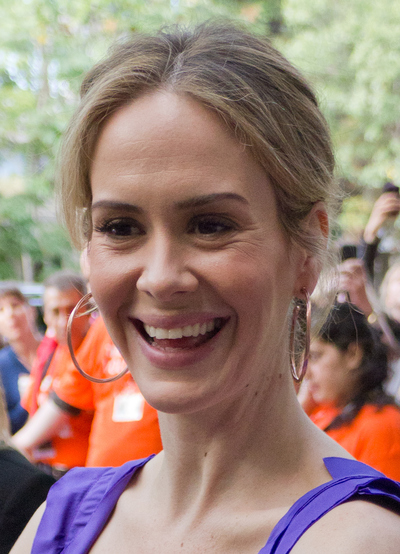 Sarah Catharine Paulson (born December 17, 1974) is an American actress whose notable appearances include roles in both film and television. She is best known for her roles in Studio 60 on the Sunset Strip, Game Change, and her roles in each season of the FX anthology series American Horror Story.

Paulson was born in Tampa, Florida, and raised in Brooklyn and Maine.

Paulson was a series regular on the cult television show American Gothic and The WB series Jack & Jill (1999), playing Elisa Cronkite. She had a minor role in the HBO series Deadwood and was a focal character in an episode of the critically acclaimed FX series Nip/Tuck. She appeared on the short-lived NBC series Leap of Faith as the main character. In 2004, she had a supporting role in the ABC series The D.A., but that show also ended after a few episodes. Paulson starred in a revival of The Glass Menagerie on Broadway and has appeared Off-Broadway in Killer Joe, Talking Pictures, and Colder Than Here. Paulson's movie credits include Down with Love, What Women Want, The Other Sister, Levitation, and Serenity.

In the 2006-2007 television season, Paulson co-starred in NBC's Studio 60 on the Sunset Strip playing Harriet Hayes, one of the stars of the show-within-a-show. To date, this is her most notable role, earning her a nomination for Golden Globe Award for Best Supporting Actress – Series, Miniseries or Television Film.

Paulson dated the actress Cherry Jones. In 2007, Paulson and Jones declared their love for each other in an interview with Velvetpark at Women's Event 10 for the LGBT Center of NYC. They broke up in 2009.

She is close friends with Amanda Peet and Zachary Quinto.