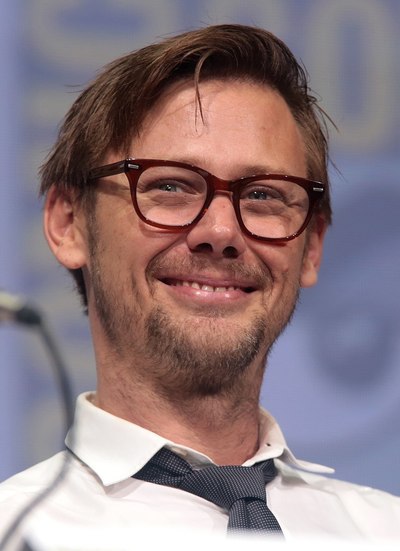 James Raymond Simpson (born November 21, 1975) is an American actor. He is known for his television work, which includes roles on Westworld, Person of Interest, The Newsroom, House of Cards, Breakout Kings, Psych, It's Always Sunny in Philadelphia, House, CSI: Crime Scene Investigation, My Name Is Earl, and 24.

Simpson was born in Hackettstown, New Jersey, the youngest of three brothers.

After graduating from Bloomsburg University with a Bachelor of Arts in theater, he acted for four seasons at the Williamstown Theatre Festival in Massachusetts.

Simpson made his film debut in the teen comedy Loser (2000), which was followed by guest spots on episodes of NYPD Blue, Cold Case and Carnivàle, as well as roles in the films D.E.B.S., Herbie: Fully Loaded, Stay Alive, Seraphim Falls, and David Fincher's Zodiac.

In 2008, Simpson starred in The Farnsworth Invention on Broadway. His portrayal of Philo T. Farnsworth was described as "superb" by The Chicago Tribune, and earned him a Theatre World Award.

From 2008 to 2009, Simpson appeared as Lyle the Intern on The Late Show with David Letterman. During that time, he also appeared on episodes of CSI: Crime Scene Investigation, My Name is Earl, House and Psych, and had supporting roles in the films The Invention of Lying and Date Night.

Other notable credits include the cult TV comedy series It's Always Sunny in Philadelphia, on which Simpson appears frequently as Liam McPoyle, and the A&E series Breakout Kings, where he starred as Lloyd Lowery.

In 2012, Simpson appeared in the films Abraham Lincoln: Vampire Hunter, The Truth About Emanuel, and White House Down. He also appeared as a recurring character on House of Cards.

Simpson currently appears as William on the HBO series Westworld. His character is a guest in the fictional Westworld, a technologically advanced Wild West-themed amusement park populated by androids dubbed "hosts", who has formed a protective bond with the lead host, Dolores (Evan Rachel Wood).

Simpson met actress Melanie Lynskey in 2001, when they both appeared in Rose Red. The pair became engaged in 2005 and married on April 14, 2007, in a chapel near Queenstown, New Zealand.

Lynskey filed for divorce from Simpson on September 25, 2012, citing irreconcilable differences. The divorce was finalized on May 23, 2014.