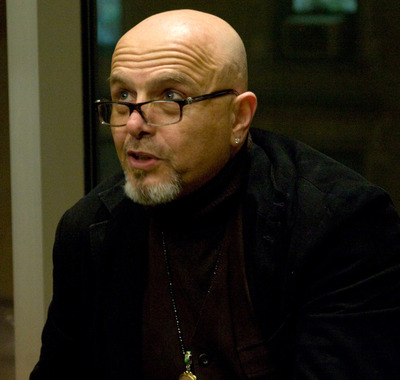 Joseph "Joe" Pantoliano (born September 12, 1951) is an American film and television actor. He played the character of Ralph Cifaretto on The Sopranos, Bob Keane in La Bamba, Cypher in The Matrix, Teddy in Memento, Francis Fratelli in The Goonies, Guido "the Killer Pimp" in Risky Business, and Jennifer Tilly's violent mobster boyfriend, Caesar, in Bound. He also played Deputy U.S. Marshal Cosmo Renfro in both The Fugitive and U.S. Marshals. He is often referred to as "Joey Pants", because of the difficulty some people have pronouncing his Italian surname.

He first grew to fame as "Guido the Killer Pimp" in Risky Business, and continued to rise in 1985 when he appeared as the villainous Francis Fratelli in teen classic The Goonies. He gained fame amongst a new generation as Cypher in the 1999 landmark sci-fi film The Matrix, and won an Emmy as Ralph Cifaretto in HBO's The Sopranos. Pantoliano is also known for his role as Eddie Moscone, the bail bondsman, in the Robert De Niro comedy Midnight Run, as double-crossed mafioso Caesar in Bound, as John "Teddy" Gammell in Memento, and as investigative journalist Ben Urich in Mark Steven Johnson's 2003 Daredevil adaptation.

Pantoliano lives with his wife, former model Nancy Sheppard, and their four children. He was introduced to his wife by his friend, actress Samantha Phillips.