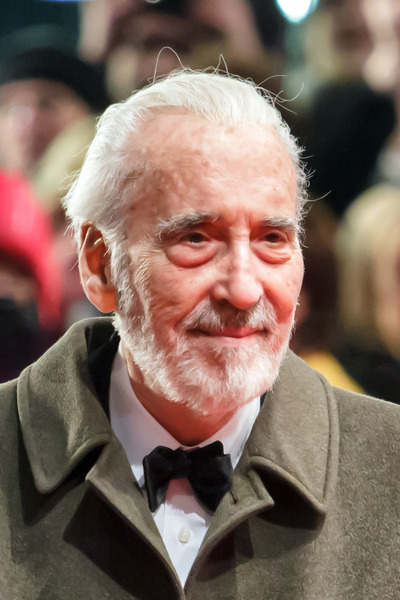 Sir Christopher Frank Carandini Lee, CBE, CStJ, (born 27 May 1922) is an English actor and singer. Lee initially portrayed villains and became best known for his role as Count Dracula in a string of popular Hammer Horror films. Other notable roles include Francisco Scaramanga in the James Bond film The Man with the Golden Gun (1974), Saruman in The Lord of the Rings film trilogy (2001–2003) and The Hobbit film trilogy (2012–2014), and Count Dooku in the final two films of the Star Wars prequel trilogy (2002, 2005).

He was knighted for services to drama and charity in 2009, and received the BAFTA Fellowship in 2011. Lee considers his most important role to be that of Pakistan's founder Muhammad Ali Jinnah in the biopic Jinnah (1998), and his best role to be Lord Summerisle in the British cult classic The Wicker Man (1973), which he also considers his best film.

Always noted as an actor for his deep, strong voice, he has, more recently, also taken to using his singing ability, recording various opera and musical pieces between 1986 and 1998 and the symphonic metalalbum Charlemagne: By the Sword and the Cross in 2010 after having worked with several metal bands since 2005. The heavy metal follow-up titled Charlemagne: The Omens of Death was released on 27 May 2013. He was honoured with the "Spirit of Metal" award in the 2010 Metal Hammer Golden God awards ceremony.

His parents separated when he was very young, and his mother took him and his sister to Switzerland. After enrolling in Miss Fisher's Academy in Wengen, he played his first villainous role as Rumpelstiltskin. The family returned to London, where Lee attended Wagner's private school. His mother then married Harcourt "Ingle" Rose, a banker and step-cousin of Ian Fleming, author of the James Bond novels. Lee spent some time at Summer Fields School, a preparatory school in Oxford (notable for sending many alumni to Eton). Lee applied unsuccessfully for a scholarship to Eton, although the interview was to prove portentous because of the presence of the noted ghost story author M.R. James. Lee later claimed in his autobiography that James had cut a very impressive figure. Sixty years later Lee played the part of M.R. James for the BBC.

Instead, Lee attended Wellington College, Berkshire, where he won scholarships in the classics, studying Ancient Greek and Latin.