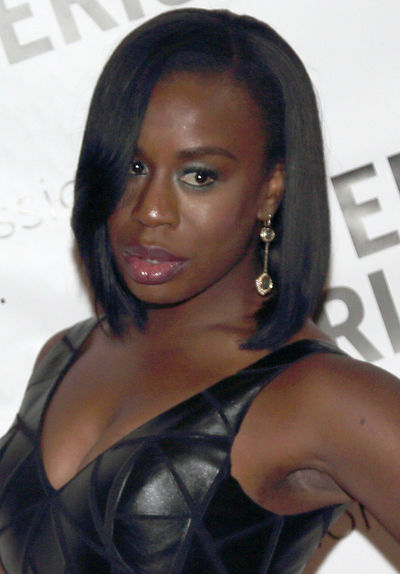 Aduba was born in Boston, Massachusetts, the daughter of Nigerian parents, of Igbo origin, from Achi in Enugu State.

She grew up in Medfield, Massachusetts, and graduated from Medfield High School in 1999. She attended Boston University, where she studied classical voice and competed in track and field. She describes her family as a "sports family" Her younger brother, Obi, played hockey at the University of Massachusetts and went on to play six seasons professionally.

Aduba first garnered recognition for her acting in 2003, when her performance in Translations of Xhosa at the Olney Theatre Center for the Arts earned her a Helen Hayes Award nomination for Outstanding Supporting Actress in a Play. Aduba played the character Amphiarus in 2006 at New York Theatre Workshop and again in 2008 at La Jolla Playhouse. In 2007, she made her Broadway debut, portraying Toby in Helen Edmundson's adaptation of Coram Boy at the Imperial Theatre. From 2011 through 2012, she sang "By My Side" as part of the original revival cast of Godspell at the Circle in the Square Theatre. Her first television appearance was as a nurse on Blue Bloods in 2012. She also played the mother of the title character of Venice at The Public Theater in New York.

In 2013, Aduba began portraying Suzanne "Crazy Eyes" Warren in the Netflix comedy-drama series Orange Is the New Black. On being cast, Aduba said:

“I auditioned for the show back in late July or early August of [2012]. I had been auditioning that summer for more television and film [after doing much theater]. I'd read a lot of scripts and I remember reading Orange Is the New Black, and it was at the head of the pack. I remember thinking, 'Wow, that is really good, I would love to be a part of that.' I went in and auditioned for another part, and my representatives called me about a month later and they were like, "Hi, we have some really good news. You remember that audition you went on for Orange Is the New Black? You didn't get it." I go, "So… okay, what's the good news?" They said they wanted to offer me another part, Crazy Eyes. I was like, "What in my audition would make someone think I'd be right for a part called Crazy Eyes?" But to be honest, when I got the script for it, it felt like the right fit.”

Casting director Jennifer Euston explains the selection of Aduba for the role thus: "Uzo Aduba...had her hair in those knots for the audition...They saw something amazing in her and were able to connect it to what they were looking for in Crazy Eyes." In joining the series, Aduba obtained her Screen Actors Guild card, about which she says, "I was just like, 'Wow, this means I'm a full actor now.' It was such a big deal, and I remember being so thankful and feeling so proud."

Aduba won a second Primetime Emmy at the 67th Primetime Emmy Awards in 2015, winning the award for Outstanding Supporting Actress in a Drama Series. This makes her the first actress to win both a drama and comedy Emmy for the same role. Aduba's performance in the third season also earned another Outstanding Performance by a Female Actor in a Comedy Series win for the 22nd Screen Actors Guild Awards. She also earned a Best Supporting Actress – Series, Miniseries or Television Film at the 73rd Golden Globe Awards.

In March 2014, Aduba performed at Broadway Cares/Equity Fights AIDS benefit concert Broadway Backwards. Aduba teamed with Rachel Bay Jones for a rendition of the song "Lily's Eyes" from the musical The Secret Garden.