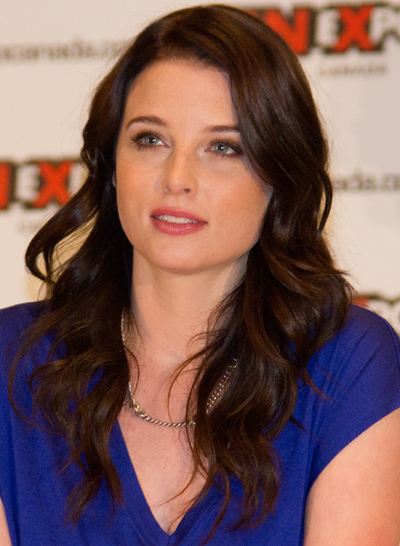 Rachel Emily Nichols (born January 8, 1980) is an American actress and model. Nichols began modeling while attending Columbia University in New York City in the late 1990s. She transitioned into television and film acting in the early 2000s; she had a big part in the romantic drama film Autumn in New York (2000) and a one-episode role in the fourth season of the hit show Sex and the City (2002).

Her first major role was in the comedy film Dumb and Dumberer: When Harry Met Lloyd (2003). She had the main role in the crime drama television series The Inside (2005), though it was cancelled after one season. Nichols gained recognition playing Rachel Gibson in the final season of the serial action television series Alias (2005–2006) and for her role in the horror film The Amityville Horror (2005).

Nichols' first starring film role was in the horror–thriller P2 (2007). She had a supporting role in the coming-of-age film The Sisterhood of the Traveling Pants 2 (2008) and appeared in Star Trek (2009). She starred in the action film G.I. Joe: The Rise of Cobra (2009) and the sword and sorcery film Conan the Barbarian (2011). She currently plays the lead role of Kiera Cameron in the science fiction television series Continuum.

Rachel Nichols was born in Augusta, Maine, to Jim, a schoolteacher, and Alison Nichols. She attended Cony High School, where she competed in the high jump. Nichols said in an interview that she was not the hot chick in high school and her mother would euphemistically refer to her as 'a late bloomer', "which meant that I had uncontrollable arms and legs, I had very long appendages. I took several years of very highly structured dance classes for me to be able to control myself."

Upon graduating in 1998, she enrolled at Columbia University in New York City, aiming for a career as a Wall Street analyst. She was noticed by a modeling agent during lunch one day and was invited to work in Paris; she eventually paid her tuition with the proceeds from her modeling work. She worked on advertising campaigns for Abercrombie & Fitch, Guess?, and L'Oreal; she also hosted several MTV specials. Nichols studied economics and psychology, as well as drama, graduating from Columbia in 2003 with a double major in math and economics.

Nichols had done commercial work and had a bit part as a model in the romantic drama film Autumn in New York (2000) when her modeling agent helped her get a one-episode role in the fourth season of Sex and the City (2002). She later said she had "never really done a proper audition before", and added that "I had such fun [filming on set], that day actually made me want to pursue [acting] more seriously."

Nichols married film producer Scott Stuber on July 26, 2008, in Aspen, Colorado. Nichols allowed her hair to return to its natural blond color for the ceremony, as it had been dyed red for her consecutive roles in Star Trek and G.I. Joe: The Rise of Cobra. She later noted that it was the first time she had ever dyed her hair. They were working on building a home in Cabo San Lucas shortly after their honeymoon. In February 2009, Nichols and Stuber separated due to irreconcilable differences.