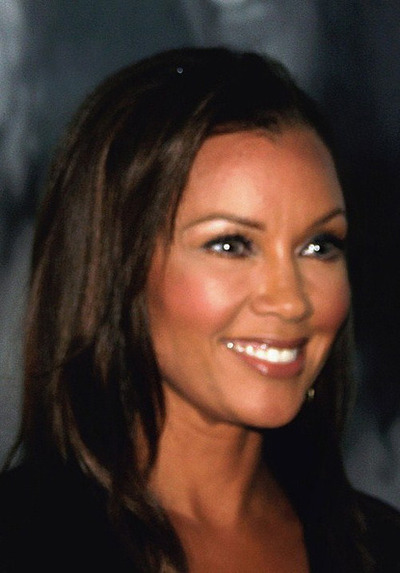 Vanessa Lynn Williams (born March 18, 1963), known professionally as Vanessa L. Williams or Vanessa Williams, is an American singer, actress, producer and former fashion model. In 1983, she became the first African-American woman crowned Miss America, but a scandal arose when Penthouse magazine bought and published nude photographs of her. She relinquished her title early and was succeeded by the first runner-up,Suzette Charles of New Jersey. Williams rebounded by launching a career as an entertainer, earning multiple Grammy, Emmy, and Tony Award nominations. She is arguably the most successful Miss America winner in the field of entertainment.

Williams's first major film role was as the star of the feature film Eraser in 1996. She also starred in the movies Soul Food, Dance with Me, The Adventures of Elmo in Grouchland, Shaft and Johnson Family Vacation. From 2006 to 2010, she played the role of the scheming, self-absorbed diva and former supermodel Wilhelmina Slater in the ABC comedy series Ugly Betty, for which she received three Emmy Awards nominations. In 2009, Williams released her eighth studio album, The Real Thing. From 2010 to 2012, she starred in Desperate Housewives as spoiled rich woman Renee Perry. She starred in the supernatural drama series 666 Park Avenue in 2012.

Williams was born in Millwood, New York, the daughter of music teachers Helen L. (née Tinch) and Milton Augustine Williams, Jr. Both of her parents were of African American descent; Williams also has Native American ancestry. Williams and her younger brother Chris, who is also an actor, grew up in Millwood, a predominantly white middle-class suburban area. Prophetically, her parents put "Here she is: Miss America" on her birth announcement.

Williams studied piano and French horn growing up, but was most interested in singing and songwriting. She graduated in 1981 from Horace Greeley High School in Chappaqua, received a scholarship and attended Syracuse University as a Musical Theatre Arts major from 1981 to 1983. She interrupted her education at Syracuse during her sophomore year to fulfill her duties as Miss America, and subsequently left the university to focus on her entertainment career. Twenty-five years later, she graduated from Syracuse by earning her remaining college credits through her life experience. Williams delivered the convocation address on May 10, 2008, to 480 other students in the College of Visual and Performing Arts. She stated:

"It's been 25 years since I was a student here. It just brought home what my message was, which is cherish the moment; these days are irreplaceable and are the beginning of the rest of your life."

Williams competed in the Miss Syracuse (University) beauty pageant when a campus musical she was in was canceled in 1983. After winning the Miss Syracuse title, Williams won the Miss New York crown in 1983, and went to compete for the Miss America title at the national pageant in Atlantic City. Prior to the final night of competition, Williams won both Preliminary competitions – Talent and Swimsuit – earlier in the week (note: each day's Preliminary competitions have winners announced; therefore there can be as many as six "Prelim" winners; three each for Talent and Swimsuit. To win a "prelim" in both is a strong precursor to success in the finals.) She was crowned Miss America 1984 on September 17, 1983, becoming the first African American to win the title. Williams' reign as Miss America was not without its challenges and controversies. For the first time in pageant history, a reigning Miss America was the target of death threats and hate mail.

Ten months into her reign as Miss America, she received an anonymous phone call stating that nude photos of her taken before her pageant days had surfaced. Williams believed the photographs were private and had been destroyed; she claims she never signed a release permitting the photos to be used. The genesis of the black-and-white photos dated back to 1982 (the year before she won the Miss America Pageant), when she worked as an assistant and makeup artist for Mount Kisco, New York photographer Tom Chiapel. According to Williams, Chiapel advised her that he wanted to try a "new concept of silhouettes with two models". He photographed Williams and another woman in several nude poses. The other woman was identified as Amy Gier Wessell, a Caucasian woman from Boulder, Colorado.

Hugh Hefner, the publisher of Playboy, was initially offered the photos, but turned them down. Later, Hefner would explain why in People Weekly, "Vanessa Williams is a beautiful woman. There was never any question of our interest in the photos. But they clearly weren't authorized and because they would be the source of considerable embarrassment to her, we decided not to publish them. We were also mindful that she was the first black Miss America." Days later, Bob Guccione, the publisher of Penthouse, announced that his magazine would publish the photos in their September 1984 15th anniversary issue, which was the same issue that featured nude photographs of Traci Lords, later found to have been only 15 years old at the time. The cover featured a photograph of a smiling Vanessa Williams with 88-year-old George Burns and the headline, "Miss America, Oh, God, She's Nude!" Guccione paid Chiapel for the rights to the photos without Williams' consent. According to the PBS documentary Miss America, Williams' issue of Penthouse would ultimately bring Guccione a $14 million windfall. After days of media frenzy and sponsors threatening to pull out of the upcoming 1985 pageant, Williams felt pressured by Miss America Pageant officials to resign, and did so in a press conference on July 23, 1984. The title subsequently went to the first runner-up, Suzette Charles, also an African American. In early September 1984, Williams filed a $500 million lawsuit against Chiapel and Guccione. She eventually dropped the suit a year later, explaining that she wanted to put the scandal behind her and move on. Although she resigned from fulfilling the duties of a current Miss America, Williams was allowed to keep the bejeweled crown and scholarship money and is officially recognized by the Miss America Organization as "Miss America 1984"; Charles is recognized as "Miss America 1984-b".

She has been married twice. Her first marriage, to public relations consultant Ramon Hervey II, was from 1987 to 1997. Hervey later became Williams' manager. The couple had two daughters, Melanie (born June 30, 1987), Jillian (born June 19, 1989), and one son, Devin (born April 14, 1993). William's daughter Jillian, following in her mother's footsteps, released her first single with the duo Lion Babe in 2012.

Her second marriage was to NBA basketball player Rick Fox. They married in September 1999 and have a daughter, Sasha, born on May 1, 2000. After The National Enquirer published pictures of Fox kissing and hugging another woman in mid-2004, Fox's representative announced that the couple had been "headed toward divorce" for over a year. A few months later in August 2004, Fox filed for divorce. Fox acted alongside Williams in two episodes during the second season of Ugly Betty, playing the role of Dwayne, Wilhelmina's sexy bodyguard.