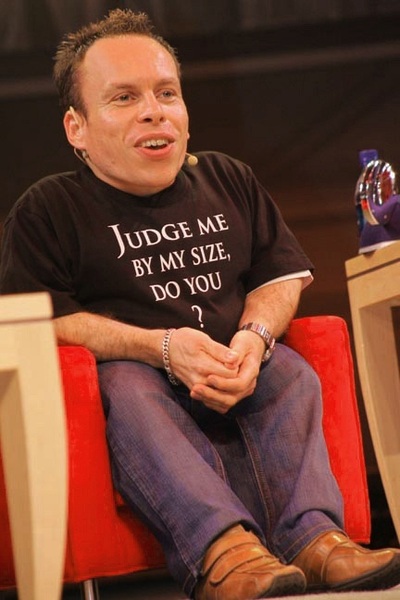 Warwick Ashley Davis (born 3 February 1970) is an English actor. He played the title characters in Willow and the Leprechaun film series, the Ewok Wicket in Star Wars Episode VI: Return of the Jedi and Professor Filius Flitwick and Griphook in the Harry Potter films. Davis has also starred as a fictionalised version of himself in the sitcom Life's Too Short, written and directed by Ricky Gervais and Stephen Merchant. Because of his dwarfism, Davis is short.

Warwick Davis was born in Epsom, Surrey, to an insurance broker and his wife. Davis also has a younger sister. He was educated at Chinthurst School and later the City of London Freemen's School. When Davis was 11, his grandmother heard a radio advert calling for people who were 4 ft. tall or shorter to be in Star Wars Episode VI: Return of the Jedi. To Davis, who was a fan of the Star Wars films, it was a dream come true. On the set of Return of the Jedi, Mark Hamill bought Davis every single Star Wars figure he did not have.

He was originally cast as an extra Ewok, but when Kenny Baker, who was originally going to be Wicket, fell ill, George Lucas picked Davis to be the new Wicket after seeing how he carried himself as an Ewok. Davis based his Ewok movements on his dog, who would tilt his head from side to side whenever he saw something strange. During production on the film, Davis was the subject of a short mockumentary film about his experience as Wicket, titled Return of the Ewok, made by Return of the Jedi's first assistant director, David Tomblin. The unreleased film was a fictional look at his decision to become an actor and act in the film and his transformation into Wicket the Ewok. Davis reprised his role as Wicket in the ABC made-for-TV films Caravan of Courage: An Ewok Adventure and Ewoks: The Battle for Endor.

In 1987, Davis was called to Elstree Studios in London to meet with Ron Howard and George Lucas to discuss a new film project called Willow, which was written with Davis specifically in mind. Willow was his first opportunity to act with his face visible. He co-starred with Val Kilmer in the film, which received a Royal Premiere before the Prince and Princess of Wales. He then moved to television to be in the BBC Television adaptation of the classic The Chronicles of Narnia, specifically in Prince Caspian, The Voyage of the Dawn Treader (as Reepicheep), and The Silver Chair (as Glimfeather) and an episode of Zorro filmed in Madrid. In 1993, he played the villainous Irish goblin in Leprechaun. He then returned to the Star Wars universe, playing three roles in Star Wars Episode I: The Phantom Menace: Weazel, a gambler sitting next to Watto at the Podrace; Wald, who was Anakin's Rodian buddy; and Yoda in some scenes where Yoda was seen walking.

Unlike most dwarfs (70%) who have a condition called achondroplasia, Davis' dwarfism is caused by an extremely rare genetic condition called spondyloepiphyseal dysplasia congenita (SED). He has said the only real drawback to being small was the associated health problems. Of his own dwarfism, Davis has said, "As you get older, you can suffer from painful hips, and our joints wear a lot quicker than for people of average height".

Davis is married and has two children, who live in Yaxley near Peterborough, Cambridgeshire. His wife, Samantha (b. 1971) has achondroplasia, and his two children also have SED. Samantha is the daughter of his business partner Peter Burroughs, and the sister of actress Hayley Burroughs. Davis met the Burroughs family while filming Willow, where they had minor roles as Nelwyn villagers.