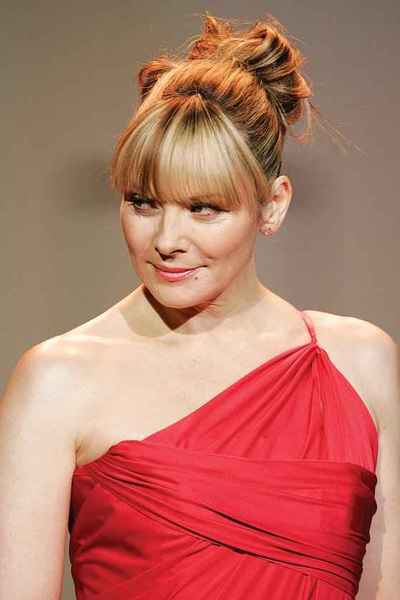 Kim Victoria Cattrall (born 21 August 1956) is an English-Canadian actress from Liverpool. She is known for her role as Samantha Jones in the HBO comedy/romance series Sex and the City and for her leading roles in the 1980s films Police Academy, Big Trouble in Little China, Mannequin, and Porky's. For her role as Samantha Jones, she won a Golden Globe Award for Best Supporting Actress in 2002 and received four nominations for the role. Her success in Sex and the City also led her to receive two Screen Actors Guild Awards out of seven nominations (including two for Outstanding Female Actress in a Comedy Series) and five Emmy Award nominations for Outstanding Supporting Actress in a Comedy Series.

Cattrall was born in Mossley Hill, Liverpool. Her mother, Gladys Shane (née Baugh), was a secretary, and her father, Dennis Cattrall, was a construction engineer. When she was three months old, her family emigrated to the Canadian city of Courtenay in British Columbia. At 11, she returned to England when her grandmother became ill. She took a number of acting examinations with the London Academy of Music and Dramatic Art (LAMDA), before returning to Canada at age 16 to finish high school.

Cattrall began her career after graduating from high school in 1972, when she left Canada for New York City. There, she attended the American Academy of Dramatic Arts and upon her graduation, signed a five-year film deal with director Otto Preminger. She made her film debut in Preminger's Rosebud in 1975.

In 1987, her lead role in Mannequin proved a huge success with audiences. One of her best-known film roles is that of Lieutenant Valeris in Star Trek VI: The Undiscovered Country. Near the end of filming, Cattrall had a photographer shoot a roll of film on the Enterprise bridge set, in which she wore nothing but her Vulcan ears. After finding out about the unauthorised photo session, Leonard Nimoy had the film destroyed.

Aside from her film work, Cattrall is also a stage and theatre actress, with performances in Arthur Miller's A View from the Bridge and Anton Chekhov's Three Sisters and Wild Honey to her credit.

In 1997, she was cast in Sex and the City, Darren Star's series which was broadcast on HBO. As Samantha Jones, Cattrall gained international recognition.