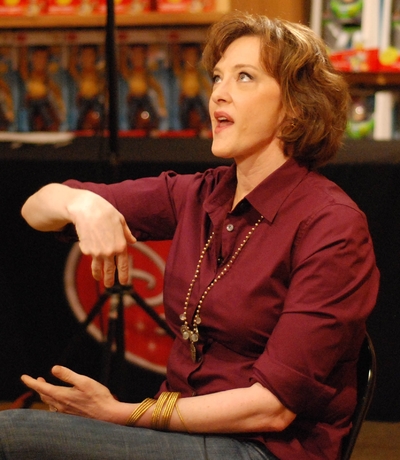 Cusack has appeared in films, television and stage productions, receiving Academy Award nominations for Best Supporting Actress for her roles in the movies Working Girl and In & Out, as well as one Golden Globe nomination. She has appeared in other films such as Addams Family Values, Broadcast News, Stars and Bars, Married to the Mob, Say Anything..., Arlington Road, Runaway Bride, School Of Rock, Toy Story 2 and Toy Story 3. She was a cast member on the sketch comedy TV show Saturday Night Live in 1985–86.

Cusack currently recurs on the Showtime hit drama/comedy Shameless, as Sheila Jackson for which she has received two Emmy Award nominations.

Cusack, the second of five children, was born in New York City, New York, and raised in Evanston, Illinois.  Her mother, Ann Paula "Nancy" (née Carolan), is a former mathematics teacher and political activist. Her late father, Richard John "Dick" Cusack, as well as her siblings Ann, Bill, John, and Susie, have also been actors.