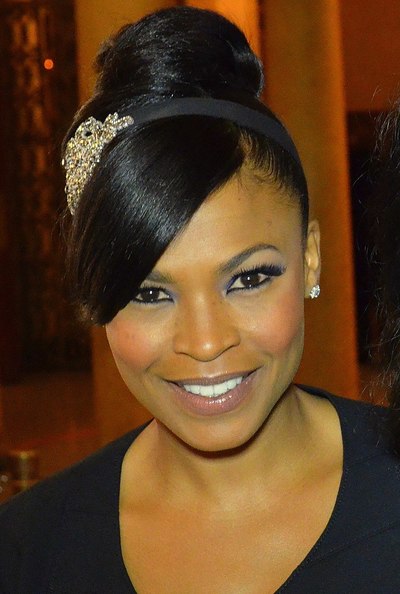 Nia Talita Long (born October 30, 1970) is an American actress. She is known for her roles in the television series The Fresh Prince of Bel-Air, Third Watch and Empire, and the films Boyz n the Hood, Friday, Love Jones, Soul Food, In Too Deep, The Best Man, Big Momma's House and Are We There Yet?.

Long was born in Brooklyn, New York, to Talita Long (née Gillman), a teacher and printmaker, and Doughtry Long, a high school teacher and poet. Her family is of Trinidadian, Grenadian, Vincentian, and Bajan descent. She has an older half-sister, the actress and comedian known as Sommore.

Long was two years old when her parents divorced. She accompanied her mother when she moved to Iowa City, Iowa, to study fine arts. Her mother moved to South Los Angeles when Long was seven years old, as she planned to marry there. She and her fiancé called off the wedding, but Talita chose to stay in Los Angeles. Long's father resides in Trenton, New Jersey.

Long attended the Roman Catholic school St. Mary's Academy in Inglewood, California. She was bused from South Los Angeles to Paseo Del Rey Elementary School in Playa Del Rey from 3rd grade through 6th grade. In addition to her academic classes, she studied ballet, tap, jazz, gymnastics, guitar, and acting. She graduated from Westchester High School in Los Angeles in 1989.

Long's acting coach was Betty Bridges, better known as the mother of Diff'rent Strokes star Todd Bridges. Her earliest role was in the Disney television movie, The B.R.A.T. Patrol alongside Sean Astin, Tim Thomerson and Brian Keith. Her first notable role on television was a three-year contract role as Kathryn "Kat" Speakes on the soap opera Guiding Light. Long portrayed Kat from 1991 to 1994. Long played Brandi in Boyz n the Hood. The film excited Long, who was doing her "first real movie role". It helped Long build her confidence as an actress. "It introduced me to the world in a way that it was okay for me to be who I am and still find success," she added. "I didn’t have to conform to anything." From 1994 – 1995, she played Will Smith's girlfriend and fiancée Beulah "Lisa" Wilkes on The Fresh Prince of Bel-Air. Jada Pinkett Smith was originally supposed to play Lisa, but was too short for the role (opposite a 6'2" Will Smith), thus leaving Nia to take the part.

In 2000, Long was offered the role of Alex Munday in Charlie's Angels, but she turned it down, and the role was eventually given to Lucy Liu. In 2003, she joined the cast of the drama Third Watch, where she played NYPD Officer Sasha Monroe, continuing until the series finale in 2005. In 2005 and 2006, Long appeared on Everwood, and appeared on Boston Legal during its 2006–2007 season. Long also starred in Big Shots from 2007–2008 alongside Michael Vartan and Dylan McDermott. In 2016, Long was cast in a recurring role for the TV series Empire. She acquired the role of Giuliana, a Las Vegas club owner.

Long appeared in supporting roles in a number of movies such as Friday and Made in America. Long played a leading role, or a member of the primary ensemble, in several films, including Soul Food, Love Jones, Boiler Room, Big Momma's House, Are We There Yet?, and The Best Man. Ice Cube has starred with her in four films, while (fellow Westchester High alum) Regina King has starred with her in two. Long starred alongside Michael Beach in Soul Food and in the TV series Third Watch.

Long appears in the video for Kanye West's "Touch the Sky". She directed Yolanda Adams's music video for "This Too Shall Pass". She won a NAACP Image Award for Outstanding Actress in a Drama Series in 2004 for her performance on Third Watch. Long co-directed and appeared in Ashanti's music video, "Baby". She also made a guest appearance on the successful sitcom Living Single during its first season.

She appeared in the 2013 film The Best Man Holiday, reprising her role from the original 1999 film. Unlike the original film, however, her character is in an interracial relationship with a white man. Long was revealed to have pursuing an interracial relationship in the film and explained: "We're living in a modern world where it happens and it's OK and it's no disrespect to any black man. I love black men, but the reality is the sistahs are marrying white men and the brothas are marrying white women and that's the world that we live in and it's not to be judged, and if it works for you then embrace it". Director Malcolm D. Lee also supported the interracial relationship being portrayed in the film. "African-American women who are extremely successful can't always find black male counterparts on that level so it's a little bit of a reflection of reality that black women are starting to date outside their race — and why not?"

Long started dating Ime Udoka in 2010, and gave birth to their son, Kez Sunday Udoka on November 7, 2011. The couple became engaged in May 2015. She also has another son, Massai Zhivago Dorsey Jr. (born November 26, 2000), from a previous relationship with Massai Dorsey.

The actress contributes her time to the Sterling Children's Home in Barbados, as a motivational speaker.

Long is a supporter of PETA.