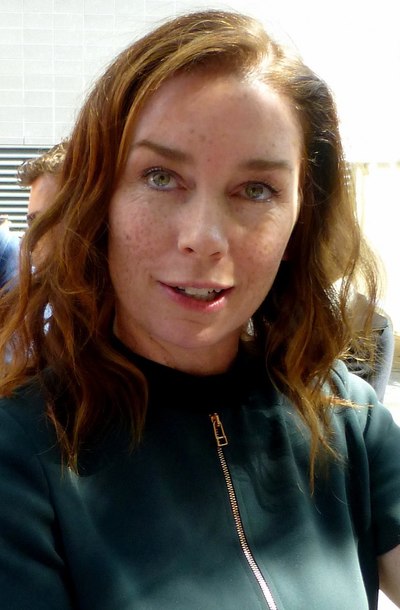 Julianne Nicholson (born July 1, 1971) is an American actress. She played Det. Megan Wheeler on Law & Order: Criminal Intent, and also appeared in the HBO series Boardwalk Empire and Showtime's Masters of Sex, as well as the film adaptation of August: Osage County.

Nicholson was born and raised in Medford, Massachusetts (outside Boston), the daughter of Kate (née Gilday) and James O. Nicholson, Jr. She is the eldest of four siblings.

After graduating from Arlington Catholic High School, she modeled in New York for six months, quit for a year, then resumed her modeling career in Paris for another six months. After returning to New York, she attended Hunter College as a general studies major for two years. While in New York, Nicholson supported herself by waitressing and eventually left school to study acting and begin her professional career.

In her first feature film role, Nicholson starred opposite Michael Caine and James Spader in the Peter Yates film Curtain Call. Later she won what proved to be both her breakthrough and favorite role as a headstrong young feminist in Peter Chan's The Love Letter. She has worked with other international directors in films such Alain Berliner's Passion of Mind, and Nick Hurran's Little Black Book. Nicholson's domestic drama credits include William Vincent (Jay Anania), Staten Island (James DeMonaco), Brief Interviews with Hideous Men (John Krasinski), Tully (Hilary Birmingham), Kinsey (Bill Condon), and August: Osage County (John Wells), for which the ensemble cast was nominated for several awards. Her domestic comedy credits include Seeing Other People (Wally Wolodarsky) and Puccini For Beginners (Maria Maggenti).

Among Nicholson's television credits are a supporting role in the television miniseries Storm of the Century and guest-starring roles in ER and Law & Order. She began to work with some of television's top producers. She was tapped by Steven Spielberg for the lead role in the paranormal drama The Others. In late 2001, Nicholson became one of the main cast members of the hit show produced by David E. Kelley, Ally McBeal, portraying the character "Jenny Shaw" for 13 episodes. She worked with John Wells on the medical drama Presidio Med and Steven Bochco on the HBO pilot Marriage. Julianne worked with Dick Wolf in his series on the short-lived NBC television drama, Conviction and in what is her best known role, as Megan Wheeler, in the sixth season of Law & Order: Criminal Intent. Nicholson said her favorite Criminal Intent episode was "Weeping Willow", which she described as "really different from a lot of the ones we've done before and very exciting and current." As of the Criminal Intent episode "Major Case", Nicholson departed the series and was replaced by actress Saffron Burrows.

In 2011, she guest-starred on Royal Pains as "Jess", one of Dr. Lawson's patients, suffering from panic attacks. She also appeared on Boardwalk Empire, as the recurring character of U.S. Assistant Attorney General Esther Randolph, that same year. In 2012, she guest-starred on The Good Wife as Callie Simko, an attorney that has an interest in Will Gardner.