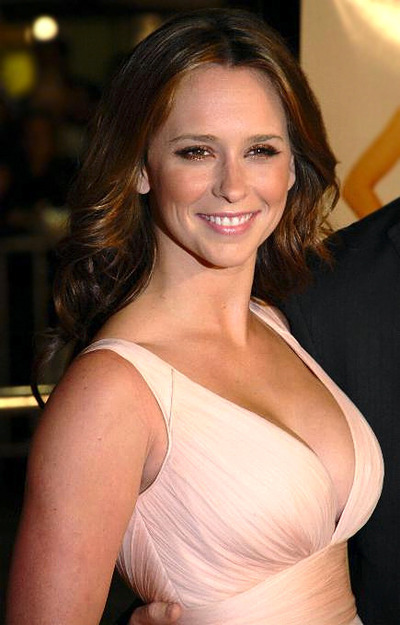 Jennifer Love Hewitt (born February 21, 1979) is an American actress, producer, author, television director and singer-songwriter. Hewitt began her acting career as a child by appearing in television commercials and the Disney Channel series Kids Incorporated. She rose to fame in teenage popular culture in her roles in the Fox series Party of Five as Sarah Reeves Merrin, and films I Know What You Did Last Summer and its sequel as Julie James.

Hewitt starred on the hit CBS television program Ghost Whisperer as Melinda Gordon, for which she won a Saturn Award in 2007 and 2008 for Best Actress on Television. She was also nominated for a Golden Globe Award for her television movie The Client List. In addition to acting, she has served as a producer on some of her film and television projects. As a singer, Hewitt has been signed by Atlantic Records and Jive Records, and is primarily known for her recordings in the pop genre. Her most successful single on the Billboard Hot 100 is the 1999 release "How Do I Deal", which peaked at No. 59. She has also contributed music to the promotion or soundtracks of acting projects. She was identified as the "#1 reader choice" on the November 1999 and May 2009 covers of Maxim. TV Guide named her the sexiest woman on television in 2008.

As of 2012 she is a recurring star on Hot in Cleveland and leads the Lifetime television series The Client List.

Hewitt was born in Waco, Texas, to Patricia Mae (née Shipp), a speech-language pathologist, and Herbert Daniel Hewitt, a medical technician. Hewitt grew up in Nolanville, in Central Texas, and has close kinship ties in parts of Arkansas. Hewitt received her middle name after her mother promised her college friend (named "Love") that if she had a daughter, she would name the girl after her. Hewitt's older brother, Todd Hewitt, chose the name "Jennifer" as an homage to a crush he had at the time she was born. After their parents divorced, Hewitt and Todd were raised by their mother. Patricia Mae Hewitt died on June 12, 2012, aged 67, following a battle with cancer.

As a young girl, Hewitt was attracted to music, which led to her first encounters with the entertainment industry. At the age of three, she sang "The Greatest Love of All" at a livestock show. The following year, at a restaurant-dance hall, she entertained an audience with her version of "Help Me Make it Through the Night". By age five, she had tap dancing and ballet in her portfolio. At nine, she became a member of the Texas Show Team (which also toured in the Soviet Union).

At age ten, at the suggestion of talent scouts and after winning the title of "Texas Our Little Miss Talent Winner", she moved to Los Angeles with her mother to pursue a career in both acting and singing. In Los Angeles, she attended Lincoln High School where her classmates included Jonathan Neville, who became a talent scout and recommended Hewitt for her role in Party of Five.

After moving to Los Angeles, Hewitt appeared in more than twenty television commercials, including some for Mattel toys. Her first break came as a child actor on the Disney Channel variety show Kids Incorporated (1989–1991), where she was credited as "Love Hewitt." She later appeared in the live action video short Dance! Workout with Barbie (1992), released by Buena Vista.

She played Pierce Brosnan's daughter in a pilot for NBC called Running Wilde (1993), which featured Brosnan as a reporter for Auto World magazine, whose stories cover his own wild auto adventures. However, the series was not picked up and the pilot never aired. Hewitt later had roles in several short-lived television series, such as Fox's Shaky Ground (1992–1993), ABC's The Byrds of Paradise (1994), and McKenna (1994–1995), and finally became a young star after landing the role of Sarah Reeves Merrin on the popular Fox show Party of Five (1995–1999). She assumed the role of Sarah after joining that show during its second season and continued it on the short-lived Party of Five spin-off, Time of Your Life (1999), which she also co-produced. The show was cancelled after half a season.

Hewitt's first feature film role was in the independent film Munchie (1992). A year later, she achieved her first starring film role in Little Miss Millions (1993). She appeared as a choir member in Sister Act 2: Back in the Habit (1993). Hewitt became a film star after a lead role in the horror film I Know What You Did Last Summer (1997), which enjoyed great box office success ($125,000,000 USD). Hewitt and her co-stars gained popular exposure from the film.

In late 2005, Hewitt began dating Scottish actor Ross McCall after he made an appearance on her show Ghost Whisperer. They became engaged in November 2007, while vacationing in Hawaii. People magazine reported that Hewitt called off their engagement in late 2008. She subsequently dated her Ghost Whisperer co-star Jamie Kennedy from March 2009 to March 2010. Hewitt began dating her The Client List co-star Brian Hallisay in March 2012. In June 2013, Hewitt announced that she and Hallisay are engaged and expecting their first child together.