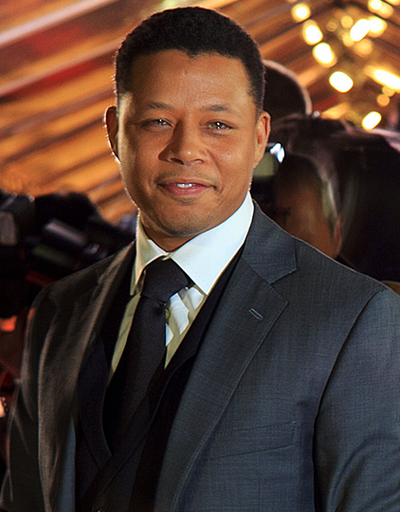 Terrence Dashon Howard (born March 11, 1969) is an American actor and singer. Having his first major role in the 1995 film Mr. Holland's Opus, Howard broke into the mainstream with a succession of television and film roles between 2004 and 2006. His roles in movies includes Winnie, Ray, Lackawanna Blues,Crash, Four Brothers, Hustle & Flow, Get Rich or Die Tryin', Idle wild, August Rush and The Brave One. Howard co-starred in Iron Man and reprised the role in the video game adaptation.

His debut album, Shine Through It, was released in September 2008.

Howard was born in Chicago, Illinois, and raised in Cleveland, Ohio, the son of Anita Williams (née Hawkins) and Tyrone Howard. His maternal great-grandmother, Minnie Gentry, was a stage actress, as were his mother and uncles. Both of his parents were biracial, of African American and European American descent; he experienced racism in his childhood. His father was involved in what has been termed the Santa Line Slaying, serving 11 months in prison on manslaughter charges after stabbing another man. At the age of 16, Howard emancipated himself from his parents and was put on welfare; at 18, he moved to New York City to pursue an acting career. He wanted to be a science teacher, though he had a low GPA in high school and was admitted to the Pratt Institute in New York only after convincing them to give him a special entrance exam. Howard did not complete his education, as he had joined his brother on an audition for The Cosby Show and was cast in the role.

Howard first entered the entertainment world when he portrayed Jackie Jackson in The Jacksons: An American Dream, an ABC miniseries. Three years later, he made his big film break in 1995's Mr. Holland's Opus. He continued being cast in television and movie roles and co-starred as Greg Sparks in the late-1990s television series Sparks, with James L. Avery, Sr. and Miguel A. Nunez Jr. Howard also appeared in The Best Man in 1999, in Ashanti's music video for her 2002 single "Foolish", and in Mary J. Blige's video for "Be Without You".

Howard, who lives outside Philadelphia in Lafayette Hill, Pennsylvania, was married to Lori McCommas for 14 years. The couple have three children: two daughters (Aubrey and Heaven) and a son (Hunter). Howard and his wife divorced in 2003 and remarried again in 2005, but have since separated. Press reports had since noted that Howard was "trying to reunite" with his wife, and that he had stated that he was "chasing after" her. His wife was born Jewish but is raising their children as Jehovah's Witnesses. In an interview with NPR, he said he wanted to become one of Jehovah's Witnesses as well.

Howard married his girlfriend Michelle Ghent, a 33-year-old commercial production employee, in a secret ceremony in January 2010. On February 2, 2011, it was reported by TMZ that Michelle Ghent had filed for divorce. In December 2012 Howard became a grandfather for the first time when his daughter Aubrey and her husband welcomed their first child.