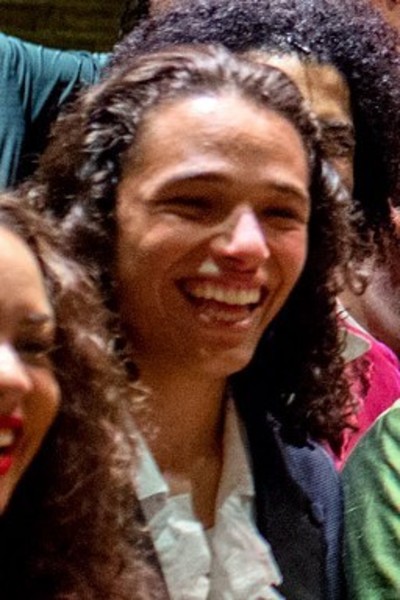 Anthony Ramos Martinez (born November 1, 1991) is an American actor. In 2015, he originated the dual roles of John Laurens and Philip Hamilton in the Broadway musical Hamilton.

Ramos was born Anthony Ramos Martinez, and is of Puerto Rican descent. He grew up in Bushwick, Brooklyn where he lived with his mother, older brother, and younger sister.

Ramos attended Halsey Junior High School, where he sang Motown songs at school assemblies in a student group called the Halsey Trio. He is a 2009 graduate of New Utrecht High School. His ambitions at the time centered around baseball, including plans to play NCAA Division III college baseball, followed by a coaching career.

After high school, Ramos attended the American Musical and Dramatic Academy, a conservatory for the performing arts, on a full scholarship. He graduated from its musical theatre program in 2011.

Starting in 2011, Ramos earned roles in a variety of regional and touring musical productions, including Sonny de la Vega in a 2012 production of In the Heights.

In 2014, Ramos performed in Heart and Lights at Radio City Music Hall, a dance show with the Rockettes which was canceled during previews. During rehearsals for Heart and Lights, Ramos auditioned for the off-Broadway production of Hamilton at The Public Theater.

After being cast in Hamilton, Ramos played Justin Laboy in Lin-Manuel Miranda's short musical 21 Chump Street, a one-time performance on June 7, 2014 that was recorded for NPR's This American Life.

Hamilton opened off-Broadway in early 2015, with Ramos originating the dual roles of John Laurens and Alexander Hamilton's eldest son Philip Hamilton. The musical moved to Broadway on July 13, 2015 in previews, and opened on August 6, 2015. Ramos left the production on November 20, 2016.

In September 2016, it was announced that Ramos had been cast in director Spike Lee's Netflix comedy-drama series She's Gotta Have It, in the role of Mars Blackmon.

Ramos played the role of Ramon in the 2018 remake of A Star Is Born, starring Lady Gaga and Bradley Cooper, and directed by Cooper.

Ramos appeared on the original Broadway cast recording of Hamilton in 2015, in the dual roles of John Laurens and Philip Hamilton.

He reunited with Lin-Manuel Miranda in October 2017 as one of the vocalists on Miranda's song "Almost Like Praying", a release to benefit Hurricane Maria victims.

On November 8, 2017, Ramos released two tracks, "Freedom" and "Common Ground", from his first solo EP, titled The Freedom EP. The release was produced by Will Wells, who had previously worked with Logic and Pentatonix. Inspired by the 2016 election, The Freedom EP was released on the first anniversary of President Donald Trump's inauguration, January 20, 2018. In addition to the previously released singles "Freedom", "Common Ground", and "Alright", the EP included two new songs, "When The Bell Tolls" and "PRayer" [sic].

Early in 2015, Ramos began a long-term relationship with fellow Hamilton original cast member Jasmine Cephas Jones, after they met during rehearsals for the Off-Broadway production at The Public Theater.