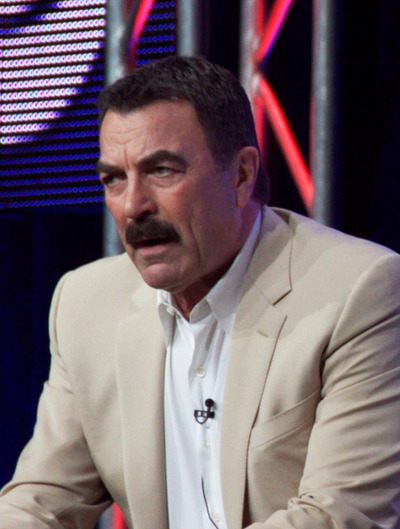 Thomas William "Tom" Selleck (born January 29, 1945) is an American actor and film producer. He is best known for his starring role as the private investigator Thomas Magnum in the television series Magnum, P.I. (1980 to 1988), based in Hawaii. He also plays Police Chief Jesse Stone in a series of made-for-TV movies based on Robert B. Parker novels. Since 2010, he has appeared as NYPD Police Commissioner Frank Reagan in the drama Blue Bloods on CBS-TV.

Selleck has appeared in more than fifty film and television roles since his initial success with Magnum, P.I., including a co-starring role in the highest-grossing movie of 1987, Three Men and a Baby; Quigley Down Under; Mr. Baseball; and Lassiter, to name a few. Selleck has also appeared as Dr. Richard Burke on Friends, where he played the on-again, off-again love-interest of Monica Geller (Courteney Cox), and A.J. Cooper on Las Vegas.

Selleck was born in Detroit, Michigan, the son of Martha S. (née Jagger), a housewife, and Robert Dean Selleck (died 2001), who was an executive and real estate investor of English and Scottish ancestry. The family moved to Sherman Oaks, California, during Selleck's childhood. Tom's siblings include brother Robert (born 1944), brother Daniel (born 1950), and sister Martha. Selleck graduated from Grant High School, in 1962.

Along with modeling, Selleck attended the University of Southern California on a basketball scholarship where he played for the USC Trojans men's basketball team. He is a member of Sigma Chi fraternity and a member of the Trojan Knights. While he majored in business administration, a drama coach suggested Selleck try acting. He then studied acting at the Beverly Hills Playhouse, under Milton Katselas.

Selleck served as a soldier in the 160th Infantry Regiment of the California Army National Guard and his unit was activated for the Watts Riots in Los Angeles.

Selleck's first TV appearance was as a college senior on The Dating Game in 1965, and again in 1967. Soon after, he appeared in commercials for products such as Pepsi-Cola.

He began his career with bit parts in smaller movies, including Myra Breckinridge and The Seven Minutes. He also appeared in number of TV series, mini-series and TV movies. Selleck also had a recurring role in the 1970s as "too good to be true" private investigator Lance White in The Rockford Files. Lance was very trusting and always lucky, much to the annoyance of Jim Rockford, the show's star private eye played by James Garner. White would frequently say to Rockford, "Don't worry Jim, clues will turn up" and then a clue would just turn up, much to Rockford's consternation, for whom obtaining clues required hard work and hard knocks. Selleck's character was based on one played in Garner's earlier TV series Maverick (1957) by Wayde Preston in the episode "The Saga of Waco Williams".

Selleck, an accessible but relatively untested actor, spent years receiving little interest from the entertainment industry. His big break came when he was cast in the lead role as Thomas Magnum in Magnum, P.I.. The producers would not release the actor for other projects, so Selleck had to pass on the equally enticing film project for the role of Indiana Jones in "Raiders of the Lost Ark", which then went to rising star Harrison Ford. The choice between the roles of Indiana Jones and Magnum actually haunted Selleck so much that before making the decision, he consulted his best friend on what to do. Together they came to the conclusion taking the high road and honoring the first contract with Universal Studios was the career-savvy direction. It turned out shooting of the pilot for Magnum was delayed for over six months by a writers' strike, which would have enabled him to complete "Raiders".

On August 7, 1987, Selleck married Jillie Mack. They have one daughter, Hannah Margaret Selleck (born December 16, 1988). The family lives in Freedom, California, and Thousand Oaks, California. Selleck has a summer residence in Jonesboro, Maine. In the 1980s—specifically around the time of filming Three Men and a Baby—Selleck also owns a home on upscale Lakeshore Road in Burlington, Ontario, a city southwest of Toronto.

Selleck lives on an avocado farm. In an interview with Good Housekeeping, Selleck talked about living and working on his farm, "So I like to get outside and work on the farm, from fixing roads to clearing brush. I hate going to the gym, so sweating outdoors sure beats sitting on a stationary bike staring at my navel. And I work cheaper than anyone I could hire to do it."