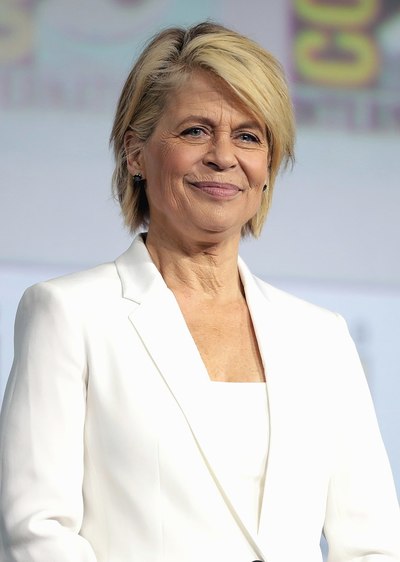 Linda Carroll Hamilton (born September 26, 1956) is an American actress best known for her portrayal of Sarah Connor in The Terminator film series and Catherine Chandler in the television series Beauty and the Beast (1987-1990), for which she was nominated for two Golden Globe Awards and an Emmy Award. She also starred as Vicky Baxter in the horror film Children of the Corn (1984), Doctor Amy Franklin in the monster film King Kong Lives (1986), and Mayor Rachel Wando in the disaster thriller film Dante's Peak (1997). Hamilton had a recurring role as Mary Elizabeth Bartowski on NBC's Chuck.

Hamilton was born in Salisbury, Maryland. Hamilton's father, Carroll Stanford Hamilton, a physician, died when she was five, and her mother later married a police chief. Hamilton has an identical twin sister (Leslie Hamilton Gearren), one older sister and one younger brother. She has said that she was raised in a very boring family, and "voraciously read books" during her spare time. Hamilton went to Wicomico Junior High (now Wicomico Middle School) and Wicomico High School in Salisbury, with Leslie, her twin. She studied for two years at Washington College in Chestertown, Maryland, before moving on to acting studies in New York City. Hamilton has said that her acting professor at Washington College told her she had no hope of earning a living as an actress. In New York, she attended acting workshops given by Lee Strasberg.

Hamilton's acting debut came first on television, followed by a major role as Lisa Rogers in the prime-time soap opera Secrets of Midland Heights (December 1980/January 1981). Her big-screen debut was in the thriller TAG: The Assassination Game (1982) and as a result, she was listed as one of twelve "Promising New Actors of 1982" in John Willis' Screen World, Vol. 34. She also shared a starring role in the CBS made-for-TV movie Country Gold, with Loni Anderson and Earl Holliman.

Hamilton played the lead role in Children of the Corn (1984), based on the horror short story by Stephen King. The movie, which made $14 million at the box office, was panned by critics. Hamilton's next role was in The Terminator (1984), opposite Michael Biehn. The movie was an unexpectedly huge commercial and critical success. Following The Terminator, Hamilton starred in Black Moon Rising, an action thriller with Tommy Lee Jones. She then returned to television as a guest-star in the mystery series Murder, She Wrote, scoring favorable reviews. Hamilton next starred opposite Ron Perlman in the television series Beauty and the Beast. The series was critically acclaimed, and she received Emmy Award and Golden Globe Award nominations. Hamilton left the series in 1989 and it ended in 1990.

Hamilton returned to the big screen with Michael Caine in Mr. Destiny (1990) and with Terminator 2: Judgment Day (1991), the sequel to The Terminator. The latter was a smash at the box office, grossing over $500 million, more than any other film of that year. Hamilton underwent intense physical training to emphasize the character's transformation from the first film. Her identical twin sister was Linda's double in Terminator 2. Hamilton received two MTV Movie Awards for her role in the film, one for Best Female Performance and the other for Most Desirable Female. She reprised the character, Sarah Connor, for the theme park attraction T2 3-D. In 1990, Hamilton was chosen by People Magazine as one of the 50 Most Beautiful People in the world. Following the success of the Terminator series, she hosted Saturday Night Live.

She returned to television in A Mother's Prayer (1995) playing a mother who lost her husband and is diagnosed with AIDS. For her performance in the film, which co-starred Kate Nelligan and Bruce Dern, Hamilton was awarded a CableACE Award for best dramatic performance and nominated for another Golden Globe Award in 1996. That same year, Hamilton filmed two motion pictures that were released one week apart in 1997: Shadow Conspiracy with Charlie Sheen and Dante's Peak with Pierce Brosnan. Shadow Conspiracy flopped at the box office, but Dante's Peak grossed $180 million and was one of the biggest commercial hits of the year. She received a Blockbuster Entertainment Award for female performance in Dante's Peak.

Hamilton has since appeared on the television series Frasier (season 4 episode "Odd Man Out" as Laura) and According to Jim and has done more TV movies, including On the Line, Robots Rising, Rescuers: Stories of Courage: Two Couples, Point Last Seen and The Color of Courage. Hamilton and her Beauty and the Beast co-star Ron Perlman reunited in the post-Vietnam war drama Missing in America (2005).

In 2009, she returned as Sarah Connor in Terminator Salvation, in voice-overs only. In 2010, she joined the cast of Chuck in the recurring guest role of Mary Elizabeth Bartowski, a CIA agent and long-missing mother of Chuck and Ellie. She also appeared as a guest star in the Showtime cable television series Weeds as the marijuana supplier for the series' main character (Mary-Louise Parker). In November 2011, she narrated the Chiller The Future of Fear horror documentary.

In 2013, Hamilton appeared as Acacia, a Valkyrie, in "Delinquents", a third-season episode of the TV series Lost Girl, a role she would reprise in two subsequent episodes, "End of a Line" in the fourth season, and "Sweet Valkyrie High" in the fifth. She subsequently appeared in a recurring role on the Syfy series Defiance, beginning in that show's second season. In 2019, she reprised her role as Sarah Connor in Terminator: Dark Fate, her first starring role as the character since 1991, and also voiced the character in the video game Gears 5.

Hamilton has been married and divorced twice. Her first marriage, from 1982 to 1989, was to Bruce Abbott, who left her when she was pregnant with their son Dalton. In 1991, she moved in with film director James Cameron following his divorce from Kathryn Bigelow. They had a daughter, Josephine, born on February 15, 1993. She and Cameron married in 1997, but the marriage was short-lived, ending in a $50 million divorce settlement in 1999.

Hamilton has described herself politically as a Democrat, but she voted for Republican candidate Arnold Schwarzenegger, her Terminator co-star, in the 2003 California gubernatorial election after his campaign convinced her he was suitable for the job.

In an October 2005 appearance on Larry King Live, Hamilton discussed her depression and her bipolar disorder, which led to violent mood swings and suicidal thoughts during her marriage to Abbott, and ultimately destroyed both of her marriages. She also discussed how she eventually received therapy and medication to manage the condition.

While filming Terminator 2: Judgment Day, Hamilton suffered permanent hearing damage in one ear when she fired a gun inside an elevator without using her ear plugs.