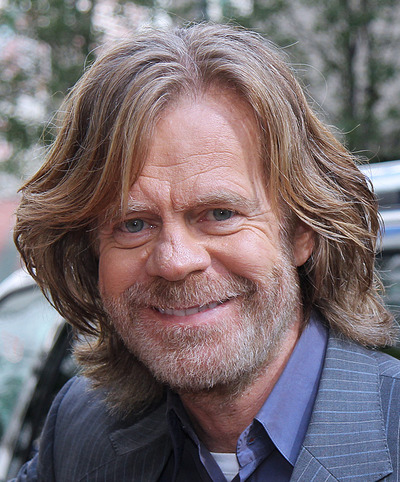 William Hall Macy, Jr. (born March 13, 1950) is an American actor, screenwriter, teacher, and director in theater, film and television. His film career has been built mostly on his appearances in small, independent films, though he also appeared in summer action films. Macy has described himself as "sort of a Middle American, WASPy, Lutheran kind of guy... Everyman".

Macy was nominated for an Academy Award for his role as Jerry Lundegaard in Fargo. He has won two Emmy Awards and a Screen Actors Guild Award, and has been nominated for nine Emmy Awards and seven Screen Actors Guild Awards in total. He is also a four-time Golden Globe Award nominee. Since 2011 he has played the main character in the Showtime television series Shameless. Macy and Felicity Huffman have been married since 1997.

Macy was born in Miami, Florida, and grew up in Georgia and Maryland. His father, William Hall Macy, Sr., was awarded the Distinguished Flying Cross and an Air Medal for flying a B-17 Flying Fortress bomber in World War II; he later ran a construction company in Atlanta, Georgia, and worked for Dun & Bradstreet before taking over a Cumberland, Maryland-based insurance agency when Macy was nine years old. His mother, Lois (née Overstreet), was a war widow who met Macy's father after her first husband died in 1943; Macy has described her as a "Southern belle".

Macy graduated from Allegany High School in Cumberland, Maryland in 1968. Afterwards, he studied veterinary medicine at Bethany College in West Virginia. By his own admission a "wretched student," he transferred to Goddard College and became involved in theatre, where he performed in ensemble productions of The Three Penny Opera, A Midsummer Night's Dream and a wide variety of contemporary and improvisational pieces. At Goddard, he first met playwright David Mamet.

After graduating from Goddard in 1971, Macy moved to Chicago, Illinois, working as a bartender to pay the rent. Within a year, he and David Mamet, among others, founded St. Nicholas Theater Company, where Macy originated roles in a number of Mamet's plays, such as American Buffalo and The Water Engine. While in Chicago in his twenties, he did a TV commercial. He was required to join AFTRA in order to do the commercial, and received his SAG card within a year, which for an elated Macy represented an important moment in his career.

Macy spent time in Los Angeles, California, before moving to New York City, New York in 1980. While living there, he had roles in over 50 Off Broadway and Broadway plays. One of his early on-screen roles was as a turtle named Socrates in the direct-to-video film The Boy Who Loved Trolls (1984), under the name W. H. Macy (so as not to be confused with the actor Bill Macy). He also had a minor role as a hospital orderly on the sitcom Kate & Allie in the fourth season episode "General Hospital" (also as W. H. Macy). He has appeared in numerous films that Mamet wrote and/or directed, including House of Games, Things Change, Homicide, Oleanna (reprising the role he originated in the play of the same name), Wag the Dog, State and Main, and Spartan.

Macy may be best known for his lead role in Fargo, for which he was nominated for an Academy Award. The role helped boost his career and recognizability, though at the expense of nearly confining him to a narrow typecast of a worried man down on his luck. Other Macy roles of the 1990s and 2000s included Benny & Joon, Above Suspicion, Mr. Holland's Opus, Ghosts of Mississippi, Air Force One, Boogie Nights, Pleasantville, Gus Van Sant's remake of Psycho, Happy, Texas, Mystery Men, Magnolia, Jurassic Park III, Focus, Panic, Welcome to Collinwood, Seabiscuit, The Cooler and Sahara.

Macy has also had a number of roles on television, including a guest appearance on The Unit, as the President of the United States. In 2003, he won two Emmy Awards, one for starring in the lead role, and one as co-writer, of the made-for-TNT film Door to Door. Door to Door is a drama based on the true story of Bill Porter, a door-to-door salesman in Portland, Oregon, born with cerebral palsy.

His work on ER and Sports Night has also been recognized with Emmy nominations.

In a November 2003 interview with USA Today, Macy stated that he wanted to star in a big-budget action movie "for the money, for the security of a franchise like that". He serves as director-in-residence at the Atlantic Theater Company in New York, where he teaches a technique called Practical Aesthetics. A book describing the technique, A Practical Handbook for the Actor, is dedicated to Macy and Mamet.

In 2007, Macy starred in Wild Hogs, a film about middle-aged men reliving their youthful days by taking to the open road on their Harley-Davidson motorcycles from Cincinnati to the Pacific Coast. Despite being critically panned with a 14% "rotten" rating from Rotten Tomatoes, it was a financial success, grossing over $168 million. In 2009, Macy completed filming on The Maiden Heist, a comedy that co-starred Morgan Freeman and Christopher Walken.

On June 23, 2008, the Hollywood Chamber of Commerce announced Macy and his wife, Felicity Huffman, would each receive a star on the Hollywood Walk of Fame in the upcoming year.

Macy and actress Felicity Huffman have been married since September 6, 1997; they have two daughters, Sophia Grace (born August 1, 2000) and Georgia Grace (born March 14, 2002). They also have a son named William H. Macy III.