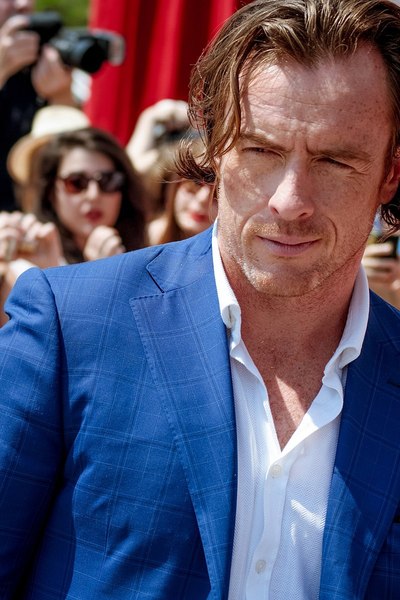 Toby Stephens (born 21 April 1969) is an English stage, television, and film actor who has appeared in films in both Hollywood and Bollywood. He is known for the roles of Bond villain Gustav Graves in the James Bond film Die Another Day (2002), (for which he was nominated for the Saturn Award for Best Supporting Actor), Edward Fairfax Rochester in a BBC television adaptation of Jane Eyre and in his role as Captain Flint in the Starz television series Black Sails. Stephens is a lead in the upcoming Lost in Space due for release on Netflix in May 2018.

Stephens, the younger son of actors Dame Maggie Smith and Sir Robert Stephens, was born at the Middlesex Hospital in Fitzrovia, London. He was educated at Aldro and Seaford College. He trained at the London Academy of Music and Dramatic Art (LAMDA).

Stephens began his film career with the role of Othello in 1992, in Sally Potter's Orlando. He has since made regular appearances on television (including in The Camomile Lawn) and on stage.

He played the title role in a Royal Shakespeare Company production of Coriolanus shortly after graduation from LAMDA; that same season he played Claudio in Measure for Measure for the RSC. He also played Stanley Kowalski in a West End production of Tennessee Williams' A Streetcar Named Desire, and Hamlet in 2004. He has appeared on Broadway in Ring Round the Moon. He played the lead in the film Photographing Fairies and played Orsino in Trevor Nunn's 1996 film adaptation of William Shakespeare's Twelfth Night. In 2002 he took on the role for which he is most widely known, that of Gustav Graves in the James Bond film Die Another Day. Aged 33 at the time of film's release, he remains the youngest actor to have played a Bond villain.

In 2005 he played the role of a British Army captain in the Indian film, The Rising: Ballad of Mangal Pandey, portraying events in the Indian rebellion of 1857. The following year he returned to India to play a renegade British East India Company officer in Sharpe's Challenge. In late 2006 he starred as Edward Rochester in the BBC television adaptation of Jane Eyre (broadcast in the United States on PBS in early 2007) and The Wild West in February 2007 for the BBC in which he played General George Armstrong Custer in Custer's Last Stand.

During mid-2007, Stephens played the role of Jerry in a revival of Harold Pinter's Betrayal under the direction of Roger Michell. Later that year, Stephens also starred as Horner in Jonathan Kent's revival of William Wycherley's The Country Wife. The play was the inaugural production of the Theatre Royal Haymarket Company, which in addition to Stephens includes the actors/actresses Eileen Atkins, Patricia Hodge, David Haig and Ruthie Henshall. Various members of the company are expected to star in upcoming productions at the Haymarket Theatre with various artistic directors. The formation of the company is considered by many London theatre critics to be a bold move for West End theatre.

In February 2008, the Fox Broadcasting Company gave the go-ahead to cast Stephens as the lead in a potential one hour, prime time US television show, Inseparable, to be produced by Shaun Cassidy. Billed as a modern Jekyll and Hyde story, the show was to feature a partially paralysed forensic psychologist whose other personality is a charming criminal. Stephens' casting was highly unusual, because Fox had not yet approved a script nor purchased a pilot for the show. However, in mid-May 2008, The Hollywood Reporter announced that "[b]y the time the network picked up the pilot . . . [the producers'] hold on Stephens had expired . . . ."

In May 2008, Stephens performed the role of James Bond in a BBC Radio 4 production of Ian Fleming's Dr. No, as part of the centenary celebration of Fleming's birth. The production was reportedly the first BBC radio dramatisation of the novel though Moonraker was on South African radio in 1956, with Bob Holness providing the voice of Bond.

Also in May 2008, Stock-pot Productions announced that Stephens will have the lead role in a feature-length film entitled Fly Me, co-starring Tim McInnerny. Stock-pot was also the producer of One Day, a short 2006 film shown at international film festivals, in which Stephens played a small part as the boss of McInnerny's character.

On 5 October 2008, Stephens appeared onstage at the London Palladium as part of a benefit entitled "The Story of James Bond, A Tribute to Ian Fleming." The event, organised by Fleming's niece, Lucy Fleming, featured music from various James Bond films and Bond film stars reading from Fleming's Bond novels. Stephens took the part of James Bond himself in the readings.

In early December 2008, Stephens read from Coda, the last book written by his good friend Simon Gray, for BBC Radio 4. The excerpts from which Stephens read included Gray's description of his participation as godfather at the christening of Stephens' son Eli.

Early in 2009, Stephens appeared as Prince John in season 3 of the BBC series Robin Hood. The series also aired on BBC America in the United States. Stephens' more recent television appearances include two episodes of a six-part television series, Strike Back, based on the novel by Chris Ryan. The series aired in May 2010.

In mid-2009, Stephens returned to the London stage in the Donmar Warehouse production of Ibsen's A Doll's House alongside Gillian Anderson and Christopher Eccleston.

In 2010, he starred in the made-for-television film, The Blue Geranium, a further sequel to the television series and films based on Agatha Christie's Miss Marple character. The show was broadcast in the US on PBS in June 2010. Stephens also recently starred as a highly self-centred detective opposite Lucy Punch in a three-part comedy television series for BBC Two entitled Vexed.

Stephens took on a small supporting role in a short film, The Lost Explorer, the directorial debut of photographer Tim Walker. The film is based on a short story by author Patrick McGrath.

Meantime, on the London stage in the spring of 2010, Stephens received outstanding reviews for his performance as Henry in a revival of Tom Stoppard's The Real Thing, directed by Anna Mackmin at the Old Vic Theatre in London. Of debuting at the Old Vic, where his parents performed as part of Laurence Olivier's Royal National Theatre Company, Stephens said: "It's quite moving for me to do something there. It means it has an added fascination. It was an historic place but I never saw anything when [my parents] were there, which is really sad, because I was just born. I'm a huge admirer of Stoppard's work."

In 2010, Stephens appeared as Georges Danton in Danton's Death. The play was another debut for Stephens, this time at London's Royal National Theatre.

Over the years, Stephens has continued to prolifically narrate audiobooks and perform in broadcast radio dramas; in the last three years, he has averaged four or five such performances per year. In January 2011, Stephens joined other stars in narrating portions of the King James Version of the Bible for BBC Radio 4 as part of a celebration of the 400th anniversary of the Bible's publication. Stephens performed the role of Raymond Chandler's Philip Marlowe in a radio serial, which debuted in February 2011. Stephens narrated another audiobook, Paul Temple and the Geneva Mystery, released in February 2011.

In 2018, he will appear as John Robinson in Lost in Space, the Netflix remake of the 1965 TV series.

In May 2007, Toby Stephens and his wife of six years, New Zealand actress Anna-Louise Plowman, had their first child, son Eli Alistair. Simon Gray, the renowned British playwright (who penned Japes, a stage play, and Missing Dates, a radio drama, both of which starred Stephens), was reportedly Eli's godfather. Their daughters, Tallulah and Kura, were born in May 2009 and in September 2010, respectively.

Plowman and Stephens performed together as Sibyl and Elyot in Jonathan Kent's revival of Private Lives for the 2012 Chichester Festival, reprised at the Gielgud Theatre in 2013.