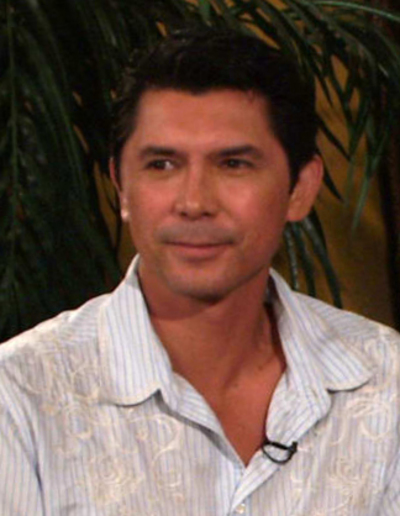 Lou Diamond Phillips (born February 17, 1962) is an American actor and director. His breakthrough came when he starred in the film La Bamba as Ritchie Valens. He earned a Golden Globe nomination for Best Supporting Actor for his role in Stand and Deliver and a Tony Award nomination for his role in The King and I. Other notable films in which Phillips has starred include Courage Under Fire, Che, and Love Takes Wing.

Phillips was born at the Subic Bay Naval Station in the Philippines, the son of Lucita Umayam Arañas and Gerald Steven Upchurch, a crew chief on a C-130 in the United States Marine Corp.. His father was an American of Scotch-Irish and one-quarter Cherokee descent, and his mother, a native of Candelaria, Zambales, is Filipino, with distant Chinese, Hawaiian and Spanish ancestry.

Phillips was named after Marine legend Leland "Lou" Diamond. After his father died, he took his stepfather's surname "Phillips" as his own.

He was raised in Texas, where he attended Flour Bluff High School in Corpus Christi, graduating in 1980. He graduated from the University of Texas at Arlington with a BFA in Drama.

The first low-budget film in which he starred was called Trespasses. Phillips' big break came with the starring role in 1987's La Bamba, in which he played early rocker Ritchie Valens. Prior to his cinematic breakthrough, he starred in the Miami Vice episode "Red Tape" (13 Mar 1987), portraying detective Bobby Diaz.

In 1988, Phillips co-starred with Edward James Olmos in the inner-city high school drama Stand and Deliver, in a role for which he was nominated for a Golden Globe Award for "Best Performance by an Actor in a Supporting Role in a Motion Picture". He plays Angel Guzman, a cholo gangster who is inspired by his math teacher, Jaime Escalante, to excel at calculus. Working to master the subject, he develops a friendship with his teacher. Stand and Deliver was filmed before La Bamba, but it was released a year later. In 1988 and 1990, Phillips co-starred with Emilio Estevez and Kiefer Sutherland in the Western films Young Guns and Young Guns II, in which he plays Jose Chavez y Chavez, a historical Old West outlaw.

In the mid-1990s, Phillips was a vocalist with the Los Angeles-based rock group The Pipefitters.

In 1996, Phillips made his Broadway debut as the King in Richard Rodgers and Oscar Hammerstein II's The King and I. Phillips won a Theatre World Award and was nominated for both a Tony Award and a Drama Desk Award for his performance.

During the making of Trespasses, he met Julie Cypher, an assistant director. They married on September 17, 1987 and divorced on August 5, 1990. Julie then announced she was a lesbian and became a partner to Melissa Etheridge.

He met Jennifer Tilly, to whom he was briefly engaged, although the two never married. He later married Penthouse model and television extra Kelly Phillips with whom he had three daughters: Grace Moorea and Isabella Patricia (twins born on October 5, 1997), and Lili Jordan born September 1999. They all reside with their mother. The two separated in 2004. Their divorce was finalized in July 2007.

He began dating artist Yvonne Boismier in 2004. They married in August 2007. Their daughter, Indigo Sanara Phillips, was born in October 2007.