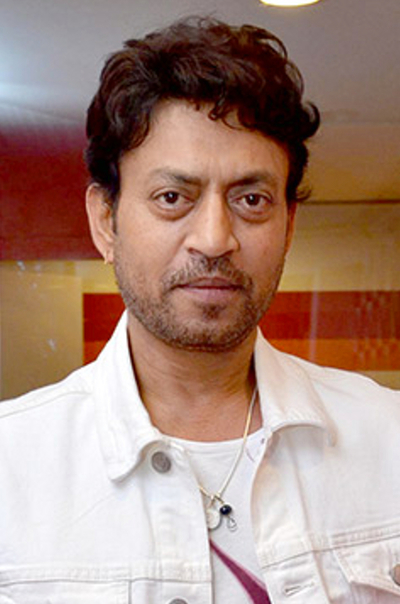 Sahabzade Irrfan Ali Khan (born 7 January 1967), credited as Irrfan Khan or simply Irrfan, is an Indian film actor known for his works predominantly in Hindi cinema. He is also known for his works in British films, and Hollywood. Film critics, contemporaries, and other experts consider him to be one of the finest actors in Indian cinema for his versatile and natural acting. In 2011, Khan received the Padma Shri, India's fourth highest civilian honour for his contribution to the field of arts.

Khan has garnered the National Film Award for Best Actor in the 60th National Film Awards 2012, for his performance in Paan Singh Tomar.[8] Khan has won the 2014 Asian Film Award for Best Actor, three International Indian Film Academy Awards, three Filmfare Awards, an Independent Spirit Award nomination, and various international honours. He also hosted a television show and commercials. As of 2015, he had appeared in more than 50 Indian films in Bollywood, and a few international films, such as Life of Pi and Jurassic World, with a featured role alongside Tom Hanks in the 2016 adaptation of Dan Brown's novel Inferno. In September, 2015, he was appointed as the brand ambassador for "Resurgent Rajasthan", a campaign by the state government of Rajasthan.

Khan was born in Jaipur, Rajasthan, to a Muslim family. Khan's mother, Begum, was from the Tonk Hakim family, and his father, the late Jagirdar, was from the Khajuriya village near the Tonk district, and ran a tyre business. Khan was studying for his MA degree when he earned a scholarship to study at National School of Drama (NSD) in New Delhi in 1984.

Khan moved to Mumbai, where he acted in numerous television serials, including Chanakya, Bharat Ek Khoj, Sara Jahan Hamara, Banegi Apni Baat, Chandrakanta, Shrikant (Doordarshan), AnooGoonj on Doordarshan, Star Bestsellers (Star Plus), and Sparsh. Earlier, he had acted in a teleplay on Doordarshan named Laal Ghaas Par Neele Ghode where he played Lenin. It was based on a translation by Uday Prakash of a Russian play by Mikhail Shatrov. He was the main villain in a series called Darr (which aired on Star Plus), where he played the role of a psycho serial killer, opposite Kay Kay Menon. He also played the role of famous revolutionary Urdu poet and Marxist political activist of India Makhdoom Mohiuddin in Kahkashan, produced by Ali Sardar Jafri.

He acted in some of the episodes of Star Bestsellers (aired on Star-Plus). In one of the episodes (Ek Sham Ki Mulakat), his role was of a parchoon shopkeeper who has a misconception that his landlord's wife is trying to seduce him and it turns out that his own wife (Tisca Chopra) is cheating on him. In the other one, he played the role of an office accountant who, after being insulted by his female boss, took revenge. He also appeared in a serial called Bhanvar (aired on SET India) for two episodes. In one episode, he performed the role of a thug who somehow lands in court. Theatre and television kept him afloat until Mira Nair offered him a cameo in Salaam Bombay! (1988) though his role was edited out in the final film.

In the 1990s, he appeared in the critically acclaimed films Ek Doctor Ki Maut and Such a Long Journey (1998) and various other films which went unnoticed. After many unsuccessful films, things changed when London-based director Asif Kapadia gave him the lead in The Warrior, a historical film completed in 11 weeks on location in Himachal Pradesh and Rajasthan. In 2001 The Warrior opened in international film festivals, making Khan a known face.

In 2003–04 he acted in Ashvin Kumar's short film, Road to Ladakh. After the film received rave reviews at international festivals, the film is being made into a full-length feature starring Khan. That same year he played the title role in the critically acclaimed Maqbool, an adaptation of Shakespeare's Macbeth.

His first Bollywood lead role came in 2005 with film Rog. His performance was praised by critics; one wrote, "Irfaan's eyes speak louder than his words and every time he is in frame, be it talking to his buddy Munish or arguing with Suhel, he shows his capability as an actor". Thereafter he appeared in several films either playing the leading role or a supporting role as a villain. In 2004 he won the Filmfare Best Villain Award for his role in film Haasil. Critics praised his performance in Haasil, saying that "as the ambitious, brash, fearless goon who is mind-blowing. He is outright scary and makes you sit up, wondering what he'll do next". He also played an antagonist in the Telugu film Sainikudu.

In 2007, he appeared in the box office hits Metro, for which he received a Filmfare Best Supporting Actor Award, and The Namesake. His chemistry with Konkana Sen in Metro was one of the highlights of the multi-star movie. They were closely followed by his appearance in the international films A Mighty Heart and The Darjeeling Limited.

After his success in Bollywood, he has continued his television career. He anchored a show Mano Ya Na Mano (airing on Star One). He hosted another programme named Kyaa Kahein which was similar to Mano Ya Na Mano.

In 2008, he was featured as a narrator in an Arts Alliance production, id – Identity of the Soul. The performance toured worldwide, with tens of thousands turning out to see the event as it toured the West Bank. He also plays the police inspector in the 2008 film Slumdog Millionaire, for which he and the cast of the movie won a Screen Actors Guild Award for Outstanding Performance by a Cast in a Motion Picture. About him, Danny Boyle said, "he has an instinctive way of finding the "moral center" of any character, so that in Slumdog, we believe the policeman might actually conclude that Jamal is innocent. Boyle compares him to an athlete who can execute the same move perfectly over and over. "It's beautiful to watch."

In 2009, he featured in the film Acid Factory. Khan has stated that he wants to do more action films in the future. He also appeared as an FBI agent in New York and as a Gujarati diamond merchant in New York, I Love You. His film, Paan Singh Tomar, about real-life athlete turned dacoit. Paan Singh Tomar received extremely favourable reviews by critics.

He recently worked on the third season of the HBO series In Treatment, enacting the part of Sunil, who is finding it difficult to come to terms with his wife's death and loneliness after moving to New York.

Khan played Dr. Rajit Ratha in The Amazing Spider-Man in 2012. Khan played the adult version of Piscine "Pi" Molitor Patel in the film adaptation of Life of Pi.

Sikdar said about him, "He was always focused. I remember when he would come home, he would head straight for the bedroom, sit on the floor, and read books. The rest of us would be hanging around gossiping." Even now, as he reads through at least one new Hollywood script a week, he believes in doing his homework, staying up till 3 in the morning, taking notes, trying to understand ways to play his character. Sikdar recalls how he would demand as many as 11 rewrites from her when he directed episodes of Banegi Apni Baat. "Once he dragged me to a police station in Mumbai to understand procedure," she recalls. Recently, he has changed his name to Irrfan. He also said he likes the sound of the extra "r" in his name.