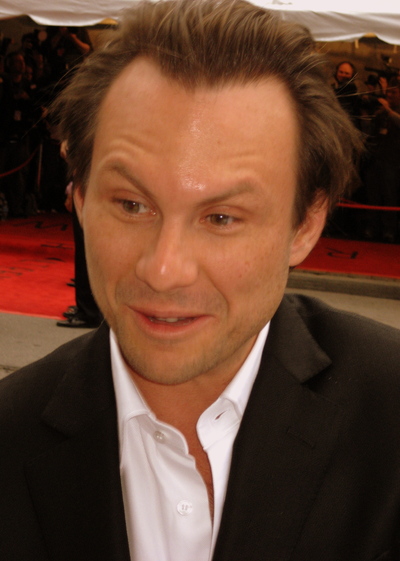 Christian Michael Leonard Slater (born August 18, 1969) is an American actor. He made his film debut with a small role in The Postman Always Rings Twice before playing a leading role in the 1985 film The Legend of Billie Jean. He then played a monk's apprentice alongside Sean Connery in The Name of the Rose before gaining wider recognition for his breakthrough role in the cult film Heathers.

In the 1990s, Slater starred in many big budget films, including Robin Hood: Prince of Thieves, Interview with the Vampire: The Vampire Chronicles, Broken Arrow, and Hard Rain. He was also featured in the cult film True Romance. Since 2000, Slater has combined work in the film business with television, including appearances in The West Wing and Alias and starring in Breaking In and Mind Games. Slater was married to Ryan Haddon between 2000 and 2005, and they had two children together. Slater has had widely publicized brushes with the law, including being sentenced to three months in jail for assault in 1997.

Slater was born in New York City. He is the son of Mary Jo Slater (née Lawton), an acting agent turned casting executive and producer, and Michael Hawkins (né Thomas Knight Slater), an actor who is also known as Michael Gainsborough. Slater has a maternal half-brother, Ryan Slater, who is also an actor. Slater attended the Dalton School, the Professional Children's School and the Fiorello H. LaGuardia High School of Music & Art and Performing Arts.

Following a run on the ABC soap opera Ryan's Hope, Slater made his Broadway debut as the lisping Winthrop Paroo opposite Dick Van Dyke in the 1980 revival of The Music Man. Additional Broadway credits include Copperfield, Merlin, Macbeth, Side Man, and The Glass Menagerie. In addition he has performed in London's West End in One Flew Over the Cuckoo's Nest and Swimming With Sharks.

Slater made his big screen debut in 1985's The Legend of Billie Jean playing Billie Jean’s brother Binx. Though expected to be a big hit, the film fell short at the box office, despite gaining a cult following. His career improved with his role in The Name of the Rose in 1986 alongside Sean Connery. Slater played Connery's apprentice monk while they investigated a series of murders at a Benedictine abbey. Slater followed this by playing Junior Tucker in Francis Ford Coppola's Tucker: The Man and His Dream (1988), Gleaming the Cube (1989) and Beyond the Stars (1989).

Slater's career rose to new heights when he played the dark character J.D. in the 1989 film Heathers alongside Winona Ryder. Heathers was billed as the teen film of the late '80s. Slater beat out many other actors such as Brad Pitt for the part and his performance drew comparison with a young Jack Nicholson. After Heathers, Slater became a major heartthrob and had offers to play more troubled youths, including as a rebellious teen in Pump Up the Volume (1990) and a wild gunman in Young Guns II (1990), in which Slater acted alongside Emilio Estevez and Kiefer Sutherland.

In 1991 Slater was cast as Will Scarlett in the Hollywood big budget production of Robin Hood: Prince of Thieves alongside Kevin Costner, Morgan Freeman and Alan Rickman. The film was a spectacular commercial success, taking US$390 million worldwide, and Slater became one of the major A-list stars of the 1990s. With Slater being a big Star Trek fan, he accepted a minor role in Star Trek VI: The Undiscovered Country, shortly after playing Charlie Luciano in the crime drama Mobsters. The following year he starred in the action comedy Kuffs, another successful film which garnered him many positive reviews.

In 1993, Slater tried to expand his film genre, playing opposite Marisa Tomei in Untamed Heart and playing Clarence Worley in the Quentin Tarantino penned cult classic True Romance, which received many rave reviews. In his review of True Romance Roger Ebert awarded the movie 3 stars out of 4 and commented, 'the energy and style of the movie are exhilarating. Christian Slater has the kind of cocky recklessness the movie needs.'

The part as the interviewer in Interview with the Vampire: The Vampire Chronicles (1994) came about after his friend River Phoenix, who originally had the role, died. Slater subsequently donated his earnings from the film to Phoenix's favorite charities. Slater played Riley Hale in the big budget John Woo film Broken Arrow (1996), which also starred John Travolta, before appearing in 1998 in Hard Rain alongside Morgan Freeman. The same year he also starred in the popular comedy opus Very Bad Things opposite Cameron Diaz.

In 2000, Slater married Ryan Haddon, the daughter of '70s model Dayle Haddon. The couple have two children, Jaden Christopher (born 1999) and Eliana Sophia (born 2001). In 2003, Haddon was arrested for assaulting Slater at a Hard Rock Cafe while on a trip to Las Vegas. Haddon allegedly threw a glass bottle and gashed Slater’s neck open. Haddon was charged with domestic battery, booked at Las Vegas’ Clark County Detention Center, and freed after posting a bond. Afterwards, Slater had to get 20 stitches on his neck. They announced a separation over Christmas 2004 while Slater was performing in a stage version of the film One Flew Over the Cuckoo's Nest in London's West End. They officially separated in 2005 and divorced in 2007.

In 2007, Slater made news for stating that he is still in love with Heathers co-star Winona Ryder. He was once quoted as saying "Work is my hobby, staying sober is my job."