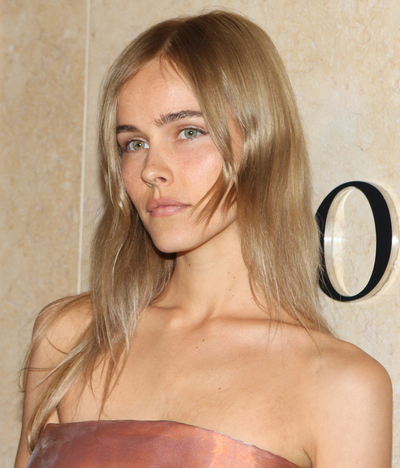 Lucas was born in Melbourne, Australia, the daughter of Beatrice, a special needs teacher, and Andrew, a pilot. Her father is Australian and her mother is Swiss, she can speak German and French in addition to English. As a child, Lucas lived in Cairns, Queensland. She also lived in Switzerland and Kakadu, in the Northern Territory. Lucas attended St. Monica's College in Cairns.

Lucas was involved in drama during her school years and attended courses at Victorian College of Arts and Queensland University of Technology. After being discovered while vacationing by her now agent Sharron Meissner, she auditioned for the role of Kit Hunter in Home and Away; although the producer of the show, Julie McGauran, felt that role was not right for Isabel, she was sufficiently impressed to have a new character, Tasha Andrews, created for her. Lucas won a Logie Award (for new popular talent) for her performance on the series.

In 2009, she appeared in the vampire science-fiction thriller film Daybreakers with Willem Dafoe. While working with Steven Spielberg on the World War II miniseries The Pacific, Spielberg suggested Lucas for the role of Alice in the sequel Transformers: Revenge of the Fallen, where he served as executive producer for the film with Michael Bay as the director.

In 2009, she was cast in the remake of the 1984 film Red Dawn, alongside Josh Peck and Josh Hutcherson, and Home and Away. The film was originally going to be released in late 2010, but due to financial problems it was pushed back to September 2011, then officially released in November 2012.

In 2011, Lucas played the goddess Athena in the fantasy film Immortals and signed on to appear in Terrence Malick's film Knight of Cups.

In November 2012, Lucas was featured as the main character in the music video for "Give Me Love" by British singer-songwriter Ed Sheeran.

In March 2013, it was announced that Lucas will star alongside Nick Jonas in the 2014 thriller Careful What You Wish For.