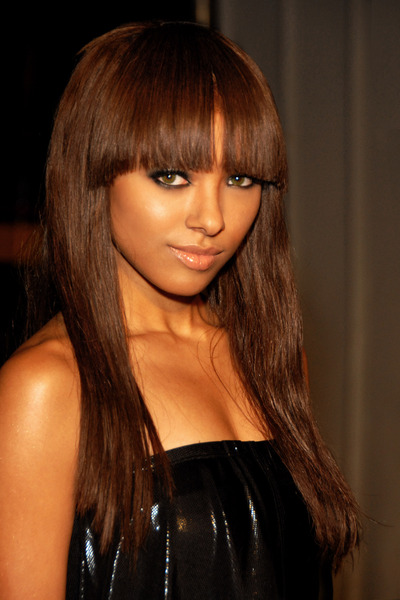 Katerina Alexandre Graham (born September 5, 1989) is a Swiss-born American actress, model, singer, and dancer. She is best known for her role of Bonnie Bennett on The CW television series The Vampire Diaries. Graham has worked for Mary Kay company in 2002.

Graham was born in Geneva, Switzerland and raised in Los Angeles, California. Her father, Joseph, is of Americo-Liberian descent, and her mother, Natasha, is Jewish (of Russian and Polish origin). Graham's father was a music executive and the godfather of two of Quincy Jones' children. Her paternal grandfather was a UN Ambassador, serving for 40 years in The Netherlands, Sweden, Romania, and Kenya. Her parents divorced when she was five. She has a half-brother, Yakov, born in Tel Aviv, Israel. Graham was raised in her mother's Jewish religion and attended Hebrew school. She speaks English, Spanish, and French, as well as some Hebrew and Portuguese. She is a supporter of gay rights.

Graham began her career in the entertainment industry at age six. Over the next eight years, she appeared in various commercials, including those for Barbie, K-Mart, Pop Tarts, and Edison. At the age of 15, Graham caught the eye of choreographer Fatima Robinson, and was asked to perform at the BET Awards as a background dancer for lil' Bow Wow. Graham followed her BET Awards appearance with work as a background dancer for Missy Elliott, Pharrell, Jamie Foxx, and choreographers Hi-Hat and Michael Rooney.[ At 17, Graham participated in a national marketing campaign to advertise Coca-Cola's soft drink Fanta. Graham appeared in the marketing campaign as a member of the "Fantanas", known as Capri, also known as Strawberry. Graham has appeared in various music videos, including Akon's "Lonely", Christina Millian's "Dip It Low", Justin Bieber and Usher's "Somebody to Love (Remix)".

In 2002 Graham made her television debut on the Disney Channel television series Lizzie McGuire. Graham went on to appear on various television shows, including CSI: Crime Scene Investigation,The OC, Malcolm In The Middle, Joan of Arcadia, Grounded For Life, and Greek. In 2008 appeared in three episodes of the Disney Channel television series Hannah Montana playing the role of a girlfriend to the character Jackson Stewart. Graham has also had notable supporting roles in films such as 17 Again and The Roommate.

In 2002 she wrote a song entitled "Derailed" which was featured in the Jean-Claude Van Damme film of the same title. In 2006 Graham pursued a career as a musical artist. Graham found her break in 2007 when she was featured on "The Donque Song" and "I Got It From My Mama" on Grammy Award Winner Rapper will.i.am's third studio album Songs About Girls. The move saw Graham embark on a world tour with The Black Eyed Peas as a supporting act for the Black Blue & You Tour.

Graham cites Mariah Carey, Britney Spears, Jennifer Lopez, Shakira, Rihanna, Nelly Furtado, Tom Jones as major music influences. In addition, her other music inspirations include Destiny's Child, The Beatles. Graham cites the work of Elvis Presley and The Spice Girls as ahead of their time and major influences on her work and aesthetic. She describes her sound as "vintage 90's with a modern twist." Graham's fashion is styled by Ava Gardner, and has cited Brigitte Bardot and Sophia Loren as her fashion musical icons.