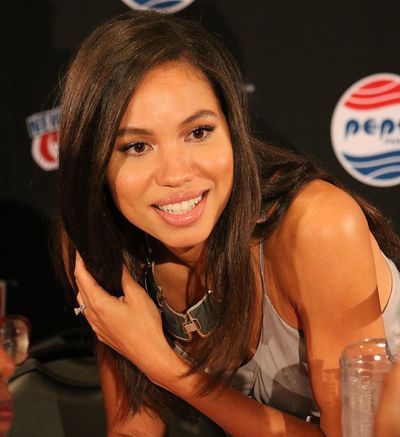 Jurnee Diana Smollett-Bell (née Smollett; born October 1, 1986) is an American actress. She began her career as a child actress appearing on television sitcoms, with her most significant regular role being on On Our Own (1994–1995). She received critical acclaim and Critic's Choice Award for playing Eve in the 1997 independent drama film Eve's Bayou.

As an adult, Smollett-Bell has starred in the films The Great Debaters (2007) and Temptation: Confessions of a Marriage Counselor (2013). She also had starring roles in a number of TV series, including the NBC sports drama Friday Night Lights (2009–2011), and the HBO vampire drama True Blood (2013–2014). In 2016, Smollett-Bell began playing a leading role as Rosalee, the house slave, in the WGN America period drama Underground. Smollett-Bell has won three NAACP Image Awards. In 2018, Smollett-Bell was cast as DC Comics superheroine Black Canary in the DC Extended Universe, making her first appearance in Birds of Prey.

Smollett-Bell was born Jurnee Diana Smollett in New York City, the daughter of Janet (née Harris) and Joel Smollett (1956-2014). Her father was Jewish (his family immigrated from Russia and Poland), and her mother is African American. She is the fourth of six performing siblings, one sister, Jazz, and four brothers: Jussie, JoJo, Jake, and Jocqui.

Smollett-Bell began her acting career appearing in a recurring roles on the ABC family sitcoms Full House and Hangin' with Mr. Cooper playing Denise Frazer. From 1994 to 1995, she co-starred with her siblings in the short-lived ABC sitcom On Our Own. In 1996, she appeared in the Francis Ford Coppola film Jack, making her big-screen debut.

Smollett-Bell received critical acclaim for her performance as 10-year-old Eve in the 1997 film Eve's Bayou opposite Lynn Whitfield, Samuel L. Jackson and Debbi Morgan. In casting the role, writer-director Kasi Lemmons envisioned "a light-skinned black child who could convey the nuances of a Creole child in the 60s." She received the Critic's Choice Award and was nominated for a NAACP Image Award. The following year, she joined the cast of the CBS sitcom Cosby, for which she won two NAACP Image Awards. In 1999, Smollett-Bell starred in the ABC TV film Selma, Lord, Selma. In 2000, she co-starred with Sharon Stone and Billy Connolly in the film Beautiful Joe. In 2001, she played the daughter of Angela Bassett in the television film Ruby's Bucket of Blood. In 2005, she co-starred with Bow Wow and Brandon T. Jackson in the roller skating film Roll Bounce. In 2006, she appeared in the drama film Gridiron Gang.

In 2007, Smollett-Bell portrayed Samantha Booke (loosely based on Henrietta Bell Wells), the sole female debater at Wiley College in the historical film The Great Debaters. The film was produced by Oprah Winfrey and Harvey Weinstein and starred Denzel Washington, who also directed the feature. For her performance, Smollett-Bel received NAACP Image Award for Outstanding Actress in a Motion Picture. The following year, she returned to television, appearing in two episodes of ABC medical drama Grey's Anatomy. From 2009 to 2011, she was regular cast member in the DirecTV drama series Friday Night Lights playing Jess Merriweather. From 2010 to 2011, she also co-starred with Jim Belushi and Jerry O'Connell on the short-lived CBS legal drama The Defenders. From 2013 to 2014, she was regular on HBO series True Blood.

In 2013, Smollett-Bell played the leading role in the drama film Temptation: Confessions of a Marriage Counselor directed by Tyler Perry. The film received negative reviews from critics, but was box-office hit grossing $53,125,354. It is the highest-grossing Tyler Perry film which the writer-director did not star in and the highest-grossing Tyler Perry drama. She later played Juanita Leonard, the wife of boxer Sugar Ray Leonard, in the 2016 biographical sport film Hands of Stone co-starring with Usher and Robert De Niro.

In 2015, Smollett-Bell was cast as lead character in the WGN America period drama series Underground. Smollett-Bell played Rosalee, a shy house slave, working on a plantation in 1857. She portrayed Black Canary in the 2020 film Birds of Prey.

Smollett-Bell has been active in HIV/AIDS causes since she was 11. She was inspired by the HIV/AIDS survivor Hydeia Broadbent. Later Hydeia and Jurnee worked together for HIV/AIDS awareness. They also worked for Black AIDS Institute and Red Cross. She spoke at the Ryan White Youth Conference. Her first encounter with the disease came at age seven when a crew member of On Our Own died of AIDS. Smollett-Bell is on the Board of Directors of Artists for a New South Africa, an organization dedicated to HIV/AIDS in Africa. She is also on the Board of Directors for the Children’s Defense Fund.