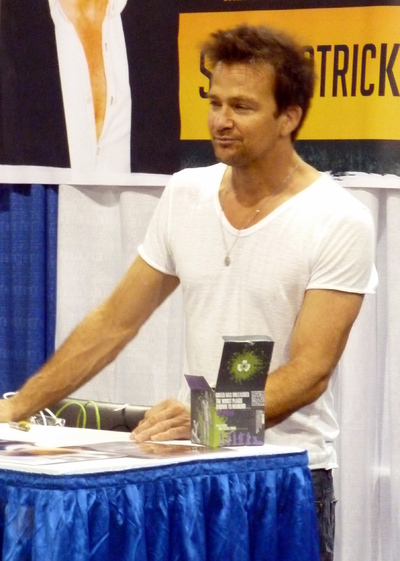 Sean Patrick Flanery (born October 11, 1965) is an American actor, known for playing Connor MacManus in The Boondock Saints , Greg Stillson in The Dead Zone, Jeremy "Powder" Reed in Powder, Indiana Jones in The Young Indiana Jones Chronicles, as well as Bobby Dagen in Saw 3D. He is also known for his role as Sam Gibson on The Young and the Restless in 2011. He starred in Devil's Carnival, a short film which was screened on tour beginning in April, 2012.

Flanery was born in Lake Charles, Louisiana, and was raised in Houston, Texas. His mother, Genie (née LeDoux), is a real estate broker, and his father, Paul Flanery, is a medical equipment salesman. His ancestry includes Irish, Cajun (French), and English. After attending Awty International School, Flanery graduated from Dulles High School in Sugar Land, and attended the University of St. Thomas in Houston.

Flanery started acting in college after he joined an acting class to meet a girl on whom he had a crush. He later moved to Los Angeles, California, in order to pursue his acting career. Since 1988 he has appeared in over 53 films, including Powder, Simply Irresistible and D-Tox. He is best known, however, for playing Connor MacManus in The Boondock Saints and The Boondock Saints ||: All Saints Day, and Indiana Jones in The Young Indiana Jones Chronicles. He had a brief role as the ascended being, Orlin, in the Stargate SG-1 episode "Ascension". He appeared on the TV show The Dead Zone in the role of Vice-President, Greg Stillson, until its cancellation.

Flanery has a black belt (promoted May 4, 2008) in Brazilian Jiu-Jitsu under Shawn Williams and a black belt in Karate. He has a dog, Donut, named after the donuts she devoured shortly after being adopted by Flanery.