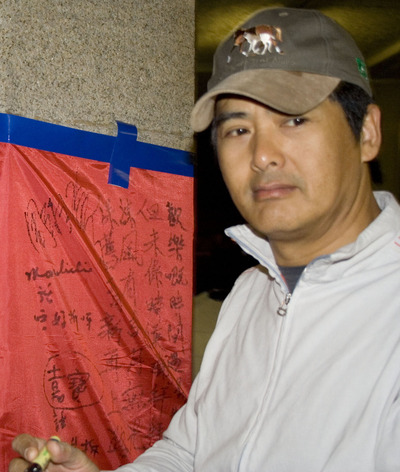 Chow Yun-fat, SBS (born May 18, 1955) is a Chinese actor from Hong Kong. He is best known in Asia for his collaboration with filmmaker John Woo in heroic bloodshed genre films A Better Tomorrow, The Killer, and Hard Boiled; and to the West for his roles in Crouching Tiger, Hidden Dragon as Li Mu-bai and Pirates of the Caribbean: At World's End as Sao Feng. He mainly plays in dramatic films and has won three Hong Kong Film Awards for "Best Actor" and two Golden Horse Awards for "Best Actor" in Taiwan.

Chow was born in Hong Kong, to a mother who was a cleaning lady and vegetable farmer, and a father who worked on a Shell Oil Company tanker. Of Hakka origins, he grew up in a farming community on Lamma Island in a house with no electricity.  He woke up at dawn each morning to help his mother sell herbal jelly and Hakka tea-pudding on the streets and in the afternoons he went to work in the fields. His family moved to Kowloon when he was ten.  At seventeen, he quit school to help support the family by doing odd jobs including bellboy, postman, camera salesman, and taxi driver. His life started to change when he responded to a newspaper advertisement and his actor-trainee application was accepted by TVB, the local television station. He signed a three-year contract with the studio and made his acting debut. With his striking good looks and easy-going style, Chow became a heartthrob and a familiar face in soap operas that were exported internationally.