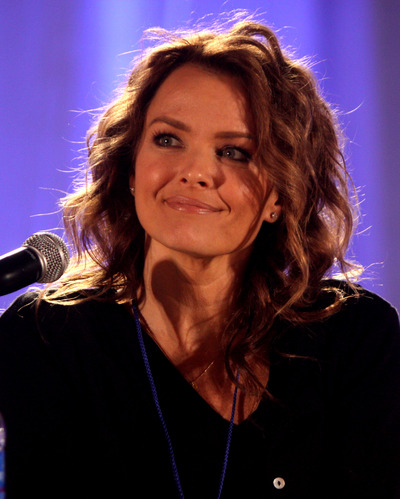 Dina Meyer (born December 22, 1968) is an American film and television actress, best known for her roles as Barbara Gordon in Birds of Prey, Dizzy Flores in Starship Troopers and Detective Allison Kerry in the Saw films. She portrayed Mrs. Hong as a recurring guest star on ABC's Scoundrels.

Dina Meyer was born and raised in Forest Hills, Queens, New York. Her family, which includes her older brother Gregory and her younger brother Evan, moved to Dix Hills, Long Island, just before her last year of junior high school. Her first experience in the entertainment industry came when she did some modeling from ages nine to 16. She always wanted to become an actress but her parents did not think that was a wise career move; they wanted her to get a good education, so she went to college and graduated from Long Island University in 1990 with a bachelor's degree in business administration with a concentration in marketing (and a minor in French).

Meyer's film debut was in the TV film Strapped in 1993, and her role in the cyberpunk thriller Johnny Mnemonic was perhaps her breakthrough performance. Before that, she had a role in the TV series Beverly Hills, 90210 as Lucinda Nicholson. In addition to Johnny Mnemonic, she has had other roles in science fiction productions, such as Starship Troopers, Birds of Prey and Star Trek Nemesis. She played Detective Allison Kerry in the horror/thriller film Saw and its sequels.