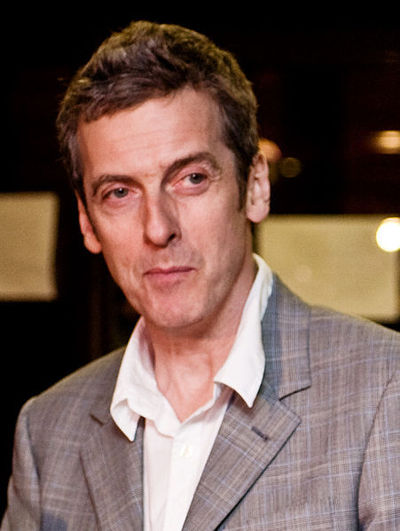 Peter Dougan Capaldi (born 14 April 1958) is a Scottish actor, film director, and screenwriter. He is known for his role as Malcolm Tucker in the BBC comedy series The Thick of It, and its spin-off film In the Loop. In 1995, he won the Academy Award for Live Action Short Film for Franz Kafka's It's a Wonderful Life, which he wrote and directed. He has also won two BAFTA Awards, and two British Comedy Awards. Since 25 December 2013 he has portrayed the Twelfth Doctor in the BBC Television series Doctor Who.

Capaldi was known to be a fan of Doctor Who during his youth. At age 15, he wrote a letter to Radio Times entitled "Dalek-Builders" enthusing over the show. A 1976 issue of Doctor Who International Fan Club Magazine, printed a piece of Capaldi's art showing a TARDIS.

Capaldi displayed an early talent for performance by putting on a puppet show in primary school. While at high school, he was a member of the Antonine Players, who performed at the Fort Theatre in Bishopbriggs. When an art student, he was the lead singer in a punk rockband called Dreamboys, whose drummer was future comedian Craig Ferguson.

Capaldi's first significant acting role came in 1983, when he played Danny Oldsen in Local Hero. He featured as Ozzy in a 1985 episode of Minder, and had roles in The Lair of the White Worm and Dangerous Liaisons in 1988. In 1990 he starred in Chain, a four part thriller on BBC2 written by Desmond Lowden and directed by Don Leaver. In 1995, Capaldi won the Academy Award for Live Action Short Film for his film Franz Kafka's It's a Wonderful Life, which he directed. In the same year he also wrote Soft Top, Hard Shoulder, which won the Audience Award at the London Film Festival, and wrote and directed Strictly Sinatra. He voiced Chief Petty Officer Grieves in the BBC Radio Ministry of Defence comedy Our Brave Boys, and soon after landed his first starring role on television as Luke Wakefield, a closeted gay man who imagines he has witnessed a crime, in the BBC drama series Mr Wakefield's Crusade. He played fictional Songs of Praise producer Tristan Campbell in two episodes of the sitcom Vicar of Dibley, and a female impersonator in ITV's Prime Suspect 3. In the Channel 4 series Psychos, he played a mathematician with bipolar disorder, made an appearance as a university professor in the sitcom Peep Show, and played a prime suspect in the 2007 series of Waking the Dead. In Neil Gaiman's gothic fantasy Neverwhere, he portrayed the angel Islington. He starred as Rory in the television version The Crow Road in 1996.

Capaldi lives in London with his wife, Elaine Collins, and their daughter, Cecily.