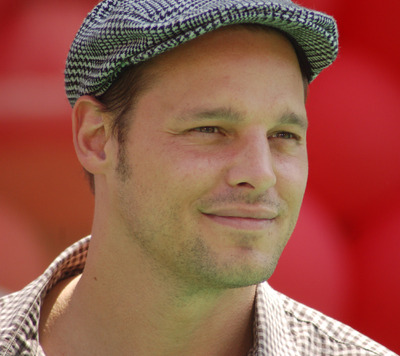 Justin William Chambers (born July 11, 1970) is an American actor and former Calvin Klein male fashion model. Since 2005, he has starred in the ABC medical drama series Grey's Anatomy as Dr. Alex Karev. He is also known for his role in the first season of the CBS crime drama series Cold Case.

Chambers was born in Springfield, Ohio, the son of Pam and John Chambers. He has a fraternal twin brother named Jason, one older brother John Jr. (Chip), and two older sisters, Mia and Susan. He and his twin brother visited hospitals often as children due to frequent bouts with pneumonia. He attended Southeastern High School in South Charleston, Ohio, and later Springfield Clark JVS.

Chambers was discovered by a modeling scout on the Paris Metro and went on to represent Calvin Klein in a fragrance campaign. He worked throughout Europe, Japan, and the United States for Calvin Klein, Armani, and Dolce & Gabbana. After deciding on an acting career, he moved to New York, where he studied at the H.B. Studios and Ron Stetson Studios for four years. That landed him a few television roles, including Another World and New York Undercover. More recently, he starred in several movies, notably Liberty Heights (1999, as Trey, alongside Adrien Brody),The Wedding Planner (2001, as Massimo, alongside Jennifer Lopez), The Musketeer (2001) Southern Belles (2005), The Zodiac (2005),and the HBO original movie Hysterical Blindness (2002). Chambers was cast as one of the leads in the CBS crime drama Cold Case but left after appearing in only four episodes. Now he plays a pediatric surgery fellow Alex Karev on the hit ABC medical show Grey's Anatomy. In 2006, he was awarded a Screen Actors Guild Award along with his fellow cast members for an "Outstanding Performance by an Ensemble in a Drama Series".

In 1993, he married Keisha, a former model agency booker. They have five children together: Isabella (b. December 1994), twins Maya and Kaila (b. June 1997), Eva (b. March 1999) and Jackson (b. January 2002). His wife and children have recently moved from their home in a suburb just outside of New York City to Los Angeles.