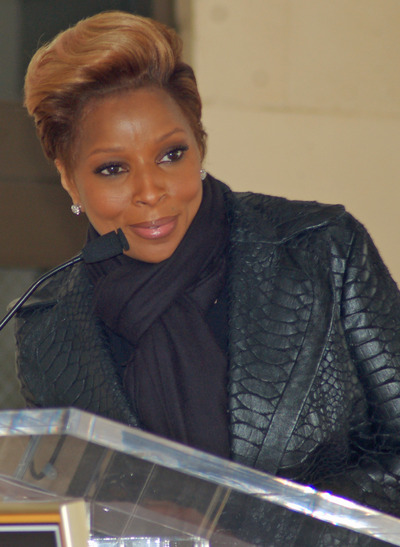 Mary Jane Blige (born January 11, 1971), better known as Mary J. Blige, is an American singer-songwriter, record producer, and occasional rapper and actress. Starting her career as a background singer on Uptown Records in 1989, Blige released her first album, What's the 411?, in 1992 and has since released ten studio albums. Blige further rose to national prominence with the release of the My Life album in 1994.

A recipient of nine Grammy Awards, eight of Blige's albums have reached multi-platinum status in the United States. My Life, in particular, is considered among the greatest albums ever recorded according to Rolling Stone, Time, and Vibe. For her part in combining hip-hop and soul in the early-1990s and its subsequent commercial success, Blige received the Legends Award at the World Music Awards. Blige also received the Voice of Music Award from music publishing company ASCAP, with its official Jeanie Weems stating that "[Blige's] music has been the voice of inspiration to women worldwide in both struggle and triumph.". Blige made Time magazine's "Time 100" list of influential individuals around the world in 2007.

As of 2013, Blige has sold more than 50 million albums and 15 million singles worldwide. Billboard ranked Blige as the most successful female R&B artist of the past 25 years. The magazine also lists her 2006 song "Be Without You" as the top R&B song of the 2000s, as it spent an unparalleled 15 weeks atop the Hot R&B/Hip-Hop Songs chart. In 2011, VH1 ranked Blige as the 80th greatest artist of all time. Moreover, she is ranked number 100 on the list of "100 greatest singers of all time" by Rolling Stone magazine. In 2012, VH1 ranked Blige at number 9 in "The 100 Greatest Woman in Music."

Blige also earned high remarks for her work in film. She starred in the 2009 Tyler Perry box-office hit I Can Do Bad All By Myself and played a role in the film Rock of Ages, which was released to theaters in 2012. She is a recipient of two Golden Globe Awards nominations for her musical contributions to the films Bobby and The Help. She is named to play music icon Nina Simone in the upcoming biopic Nina. In partnership with the Home Shopping Network (HSN) and Carol's Daughter, Blige released her "My Life" perfume. The perfume broke HSN records by selling 65,000 bottles during its premiere. The scent went on to win two FiFi Awards, including the prestigious "Fragrance Sales Breakthrough" award.

Blige was born on January 11, 1971 in The Bronx, New York. She is the second of four children born to parents Cora, a nurse, and Thomas Blige, a jazz musician. Blige's mother was an avid fan of R&B/Soul music and constantly spun Aretha Franklin, Gladys Knight, Patti Labelle, Chaka Khan, and Jean Carne records when Blige was a child. These artists had a profound impact on Blige at a very young age. Blige was taught to sing by her father, who later abandoned Blige and sister LaTonya following his divorce from Cora Blige in 1980. At the age of five, Blige was molested by a family friend.

Blige spent her early years in Richmond Hill, Georgia, where she sang in a Pentecostal church. She later moved to Schlobohm Apartments in Yonkers, New York, where she lived with her mother, older sister, five cousins, and two aunts. She dropped out of Roosevelt High School in the eleventh grade. Blige recorded an impromptu cover of Anita Baker's "Caught Up in the Rapture" at a recording booth in the Galleria Mall in White Plains, New York. Her mother's boyfriend at the time later played the cassette for Jeff Redd, a recording artist and A&R runner for Uptown Records. Redd sent it to the president and CEO of the label, Andre Harrell. Harrell met with Blige and in 1989 she was signed to the label, becoming the company's youngest and first female artist. Blige's early years consisted of session work for the likes of Jeff Redd, who introduced her during a live performance at the Apollo Theater. A year later, she sang the hook on Father MC's hit "I'll Do 4 U" and was prominently featured, singing, at the end of the video.

Production for Blige's debut album began in 1992, with Sean "Puffy" Combs, who was at the time a 22-year-old A&R executive at Uptown Records, selected as the executive producer of the project. When first introducing Mary J. Blige to Uptown Executives at a convention, Sean Combs originally nicknamed Blige the "Queen of Ghetto Love". However, Andre Harrell, Combs's supervisor, found the name unsatisfactory and subsequently dubbed her the "Queen of Hip-Hop Soul".

Establishing Blige's niche in R&B became the paramount goal for Sean Combs. Given the fact that most female R&B acts during that time were very glamorous and refined, Combs purposely molded Blige into the exact opposite so as to underscore her uniqueness and maintain her connection to her urban roots. From her fashion style to her sound, Blige was completely different from most female artists in the early 1990s. Baseball caps, combat boots, and baggy clothes constituted her signature style. In regards to her music, on July 28, 1992, Uptown Records released What's the 411?. Blige's inaugural album ushered in a new era and genre of R&B music.

Called the "Queen of Hip-Hop Soul", Blige is credited with influencing the musical marriage of Hip-Hop and R&B. Ethan Brown of The New Yorker says that albums "What's the 411?" and "My Life", in hindsight, invented "the sample-heavy sound that reinvigorated urban radio and became a blueprint for nineties hip-hop and R&B.". Brown further concludes that Mary's "duets with the Wu-Tang Clan's Method Man and Ghostface Killah set the trend for collaborations between rappers and R&B songbirds like Mariah Carey.". Tom Horan of The Daily Telegraph comments that Blige, being a hugely influential figure in popular music, "invented what is now called R&B by successfully combining female vocals with muscular hip hop rhythm tracks. All over the world, that recipe dominates today's charts.". Called one of the "most explosive, coming-out displays of pure singing prowess" and "one of the most important albums of the nineties", What's the 411? saw Blige pioneer "the movement that would later become Neo soul, generating gripping songs that were also massive radio hits."

In 2001, Blige met record industry executive Martin Kendu Isaacs (known as "Kendu") who became her manager. The two were married on December 7, 2003, in a small private ceremony at Blige's home attended by 50 guests.

Blige has been a resident of Cresskill, New Jersey.